I wish I could be a vegan. I just finished a book called Skinny Bitch, by Rory Freedman and Kim Barnouin, and it’s making me rethink almost everything that I had always believed about food. I say, “I wish” about being vegan because I know that my body does best when I have animal products in my diet. I feel great when I include things like eggs (very often), yogurt (often), and meat (rarely) in my meals. I just wish I could have those things without harming animals – wishful thinking. Maybe this attitude seems selfish, but I take health very seriously and I do whatever I can to keep my body in great shape. 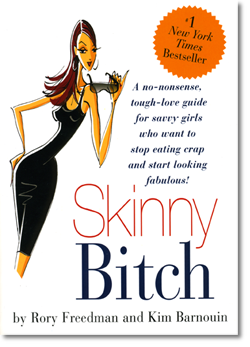 Since I won’t become a vegan, I’m going to at least try to buy more organic and local foods. My new house in California is near a great Asian grocery store and I will always have access to fresh produce.

On a side note, my sister, a vegetarian since the age of 9, read one chapter of the book and promptly declared herself a vegan. (She has since gone back to being vegetarian because being vegan can be very restricting for both the mind and the body.)

On the ride up through California, my mom and I passed a factory farm called Harris Ranch on Interstate Highway 5. I was sleeping at first, but the stench was so bad that I woke up. This feedlot is California’s largest – it holds about 100,000 cows on 800 acres. There is no grass, only mud and dust. They live in their own excrement and are injected with hormones to become fatter before they’re sent on to the slaughterhouse.

After seeing and smelling something like that I don’t want to eat the meat that comes from those animals. You smell the farm before you can even see it. It was pretty terrible and I think my mom was rather shocked (she doesn’t eat beef anyway). After seeing that, I want to make an effort to find humanely raised meat (for the rare occasions that I do eat meat).

Skinny Bitch the book – my verdict:

Going back to the book – I would strongly recommend Skinny Bitch for anyone who can take their style of writing. It’s crude and straightforward and they are not afraid to criticize. It’s graphic and gross at times, but effective. It’ll make you think about what you put in your mouth and make you aware of the dishonesty of the American government and our regulation systems.