I woke up at 4:30 this morning and couldn’t sleep, so I stayed up until around 7 doing some work. I have an exciting announcement that I’ll probably post about later tonight or tomorrow! Then I was awakened by a phone call from my mom’s dentist (I wanted a 2nd opinion) around 8… So after that I went back to bed again, but had to get up at 10:45 to turn off some cronjobs for a work project (nerd-speak, just ignore it).

So then I just stayed up. I did 25 minutes of the Biggest Loser Cardio Max workout, ran some errands, and finally sat down to eat breakfast/lunch at 2pm. 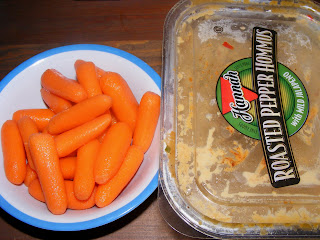 After reading this post by Kate, I’ve decided to try to increase my protein in an attempt to ward off mindless snacking/binging. I don’t have a huge problem with it, but I do have triggers – hand me a box of cereal and I’ll eat half the box without even realizing it. So that’s why I went with the egg whites and the hummus instead of my usual weekend eats, which mainly consist of fruit.

Not sure what the dinner plans are yet. I think I’m going to go to Kohl’s now because Kath just bought some awesome bowls and I want to get some good deals, too.