I got up around 9:30 today, planning to get in a nice workout with OnDemand’s Exercise TV – but I was too sore! I did do about 20-25 minutes of yoga, then a 10 minute cardio/ab workout, but I was just too achy to do much else. I think I’ll have to stretch better next time I do a more intense workout like yesterday’s. I’m so used to walking – no warmup, no cooldown – that I just jumped into it and assumed that the yoga would serve as my cooldown. Next time I’ll be more careful. This morning I stretched for a while after the yoga and ab workouts, so I’m hoping I’ll feel better tomorrow.

By the time I was finished working out and showering, it was nearly 11, so I decided on a light breakfast so that I wouldn’t push lunch back too late. Last night I cooked up the remainder of the tuna steak that we got on Saturday (so that it wouldn’t go bad), knowing that I would make a tuna salad for lunch today. I have to say – after having fresh tuna steak in tuna salad I don’t know if I can go back to canned tuna! Luckily I don’t have it that often anyway, but today’s tuna salad was a real treat.

After I had breakfast I made mint chutney and banana oat muffins, inspired by Kath. I changed it up a bit and these muffins ended up only having 86 calories apiece! The recipe will be up on my other blog soon; here’s the one for mint chutney. 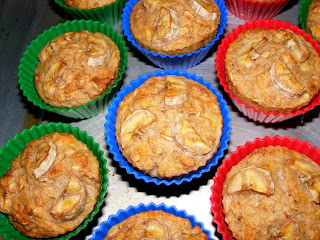 Dinner is up in the air – I’m thinking of some sort of noodle/veggie dish + leftovers from PF Chang’s last night. I think Bobby and I are going to take a walk later – if I’m not still too sore! Right now I’m going to try to get some work done. I left early on Friday to take Bobby test driving and I didn’t finish everything I had wanted to.

Lots of grazing and delicious fruits and veggies today. Then dinner out on the town with Bobby to celebrate getting his new car. It’s beautiful.

Today I woke up with a ton of energy. I opened up my computer and started one of my favorite yoga videos, but got bored after about 30 seconds. I decided to check out “Exercise TV” on OnDemand (Comcast), and it actually had a lot of options. I did the 22 minute cardio workout from the Biggest Loser – it was so intense! I felt very out of shape compared to the biggest losers that were doing the video in the background. I also did a 10 minute AM Yoga program. Then I walked a mile to the farmers’ market, walked around for 30 minutes or so, and walked back. Bobby met me on the way home so that he could carry the ~15 pounds of produce that I picked up. 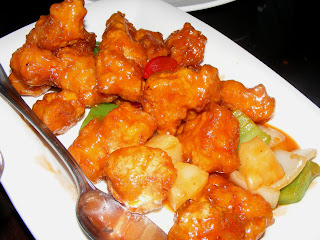 Bobby has a cherry brownie sitting on the counter than might get eaten later. I’ll let you know in the morning!