This morning I did a 45-minute yoga session: Yoga Fitness Fusion by Angie Stewart (Exercise TV).  I’ve done it before, but not when I was actually strong enough to do all the moves completely – I was sweaty and refreshed at the end.  Sabrina had a great suggestion for my knees – lots and lots of stretching.  It sounds easy enough, so I’m going to give it a shot!

Breakfast was my recent obsession – super creamy soupy oats.  I actually added a packet of Splenda today (we have them at the office), which made this perfectly sweet and delicious. 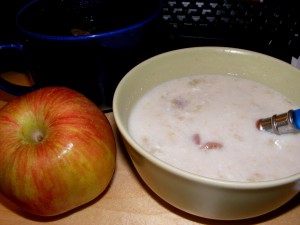 I took my walk (1 hour) before lunch today and it actually started raining at the end!  Just a slight drizzle – this is only the second time it’s rained here since April I think.  It rained one other weekend in October.  Lunch was pretty simple: 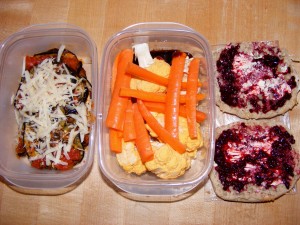 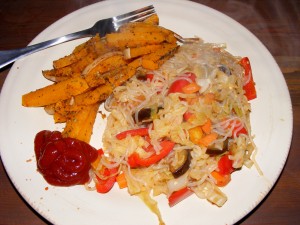 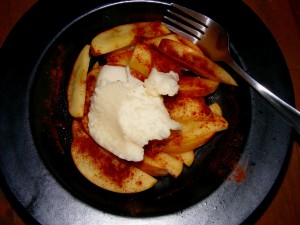 We were going to carve the pumpkin tonight, but both of us are tired from work and we’re just snuggling on the couch instead.  So now we have a huge pumpkin to do something with!  Maybe we can eat it instead of carving… Or maybe we’ll just carve it after Halloween.  It can be a Thanksgiving pumpkin.  I still haven’t decided if I’m dressing up yet, but there are lots of festivities at work tomorrow and I have a super-cute bright orange skirt (Gap) that I’m going to wear.  Happy Halloween! Enjoy your candy and treats!

11 Replies to “The Thanksgiving Pumpkin”