My dad is here! He’s currently asleep on the couch (he’s been up since 1am Pacific and currently it’s about 9pm Pacific – poor guy!).  But before I get to our day…

This morning I went on a short 2.5(ish) mile run.  I’m estimating here because I never did this exact route before and didn’t have time to drive it to see how long it actually was.  It ended up being about 22 minutes.  When I got back I did Buns and Thighs Yoga (Tom Morley is the instructor) again.  I like it a lot – not quite as much as Cardio Yoga, but I’ll take what I can get.  After last night’s trail mix overload I needed a good workout to get hungry, and this did the trick!

When I got to work I made breakfast (the usual): 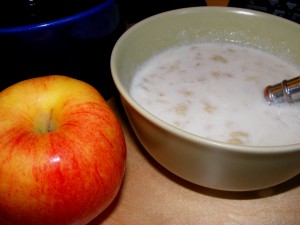 And (surprise, surprise) I snacked on a wrap mid-morning.  After my hour-long lunch walk I ate my lunch: 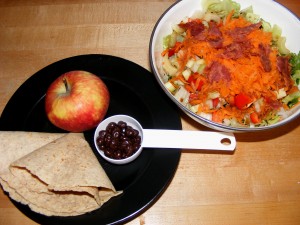 And my snack this afternoon was just an apple.  I left work early and then Dad and I went to downtown Mountain View to walk around.  We walked for a while and then decided to go grocery shopping.  He insisted on buying some food for himself and refused to let me pay, so I’m not counting it towards the Thanksgiving Challenge.  He’d never been to Trader Joe’s and thought it was very cool.  I let him try our Buffalo Jerky and he loved it, so he bought himself some jerky from TJ’s as well.  I also took him to Milk Pail, this adorable semi-open air market with very low prices.  He bought me a pineapple for… $0.75!  And it was organic.  He was kind of in shock because pineapples are normally around $3-4.

When we got home I made dinner: 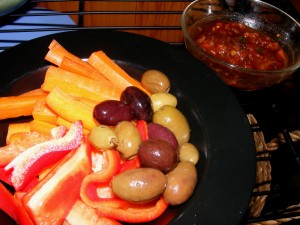 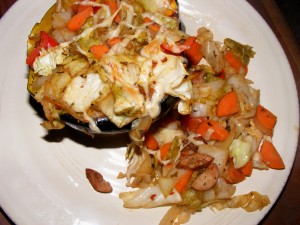 I made a rice stuffing for the boys and they got cheddar instead of rice cheeze.  I also ended up eating Bobby’s skin and Dad’s skin from their squash halves – silly boys not eating the skin!  I think it’s the best part.

For dessert I cut up the pineapple.  Dad had already fallen asleep but he woke up to have a few bites, and Bobby had some as well.  I had more than this bowl, so multiply by 3 or so.  It was so fresh and yummy.  Thanks Dad! 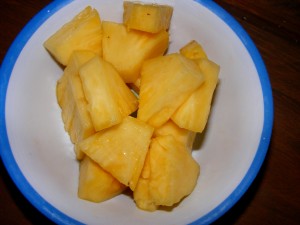 Tomorrow Dad and I are going for a run in the morning and I’m going to try to get him to do yoga with me (not a chance).  Then we’re heading up to San Francisco for the day for some sightseeing.  We’ll meet up with Bobby back in Mountain View for dinner.  Happy Friday!

Question – how far away from your parents do you live and how often do you get to see them? I live in California and my parents live in New Jersey – so that last time I saw mine was in May when I went back to visit Cornell for Bobby’s graduation.