This morning my dad and I got up bright and early.  We went for a run – I did 4.2 miles and he did 4.4 – it was a little less than 40 minutes.  My dad’s a good runner and he can go a lot faster than I can but he paced me for a while and I was able to go faster than I usually do.

When we got back I did Buns and Thighs Yoga (my dad tried to join in but he kept falling over so he stopped…) and then I made breakfast.  This was supposed to be 2 oatmeal-protein pancakes but it turned into a scrambled mess instead! 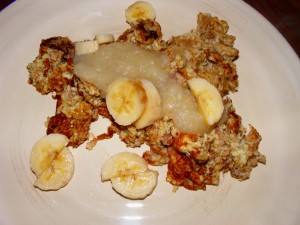 And I topped it with 1/2 cup unsweetened applesauce and 1/2 a banana.  I also had an apple on the side. 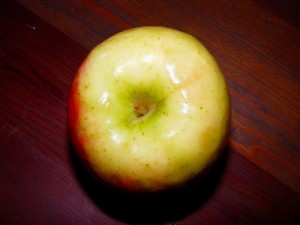 We went to San Francisco today and ended up walking 7.8 miles in total.  We got out of the train station and walked to the Ferry Building, where we had lunch.  I got mine at Delica, a cute little Japanese deli.  I got two salads; they were very filling.  The soybean one had lots of beans and some fried tofu.  I think both of them had a decent amount of oil in the dressing so the added fat definitely helped to hold me over as well. 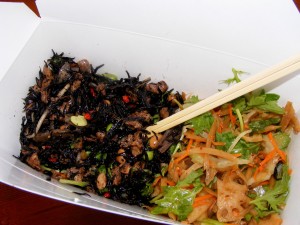 After lunch we walked up to Fisherman’s Wharf… and then we thought that we weren’t very far from the Golden Gate Bridge, so we tried to walk to that as well.  We ended up about 3.9 miles away from the train station (I just google mapped it)!  We were tired, so we walked all the way back to the station to go home.  On the way home we each had an apple (pink lady).

When we got back I was pretty famished so after I took a refreshing hot shower I set out a veggie plate with salsa and bbq sauce: 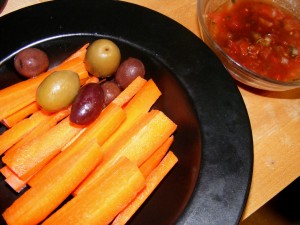 And then we decided to go to Blue Mango, the restaurant that Bobby and I went to with Brittany of Eating Bird Food the other week!  We all shared 4 dishes: 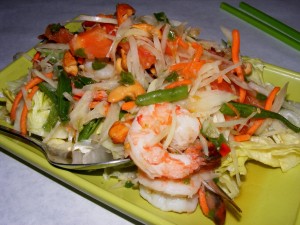 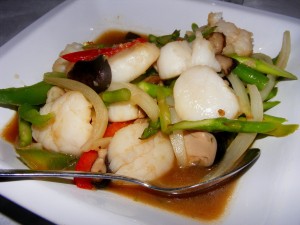 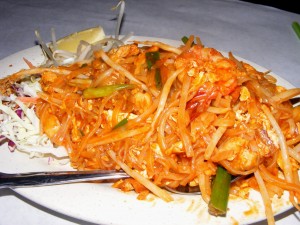 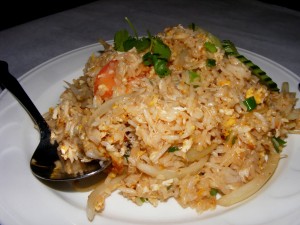 When we got home I had… an apple!  No surprise there.  I also snacked on some veggies and salsa, as well as about 60-70 pistachios.  I love the nutrition stats for pistachios – 47 kernels for only 158 calories.  This kind is slightly spicy. 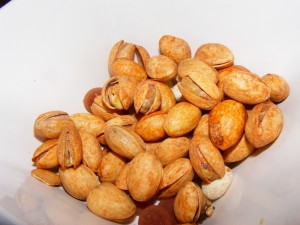 I’m not sure what we’re doing tomorrow yet, but I’m sure it’ll be a fun day.  I like spending time with my dad 🙂  We might head up to Napa, we’re definitely spending time in Palo Alto and seeing Stanford, and we’ll probably walk some more.