I’m participating in Leng’s Salad Challenge – eat one salad a day for 2 weeks, starting yesterday (Sunday the 16th).  So far I’m doing well!  Yesterday I started out the day (in the early afternoon – we slept in) with a plate of delicious leftover salads and some fresh green tea: 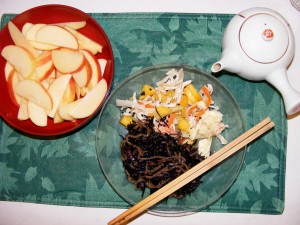 I snacked on more apples and persimmons throughout the day.  Then we went to dinner: 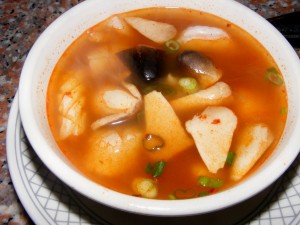 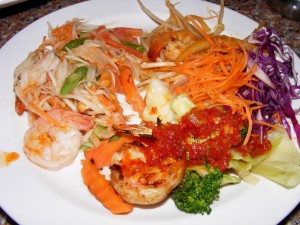 And of course after dinner I had more fruit salad – apple, persimmon, and lemon juice.  I think I had another persimmon at some point.  And I had 2-3 clementines. 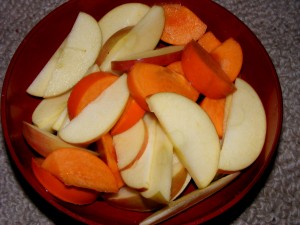 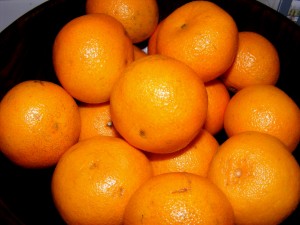 Around midnight I had a carb attack and ended up eating about half a baguette dipped in whipped real butter.  I don’t know what possessed me to do this, but it sure was delicious.  The baguette was whole wheat and it was so soft and flavorful.  Bobby was making ramen and I was bored and feeling munchy, which is how I started.

This morning we were up at 4am eastern time (which is 1am pacific time, which is where I am currently!).  I didn’t eat anything til we were on the first plane, at which point I had a nice first breakfast/snack: 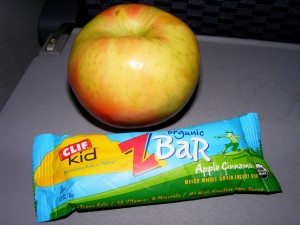 On the second flight they had better food and I ate this: 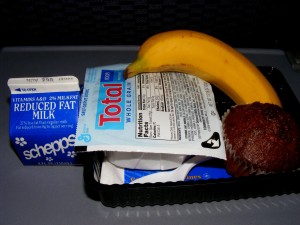 When we got home I tried to replicate Bobby’s mom’s hijiki/mushroom/konnyaku salad and I got pretty close.  The recipe’s not quite ready yet; it needs tweaking.  I’ll post it when I have it right.  So this was my lunch spread: 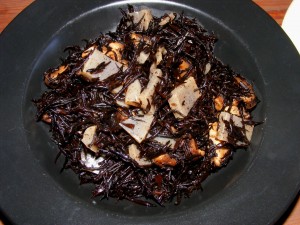 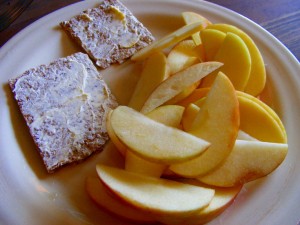 We’ve been napping for the last couple of hours in an attempt to return to normalcy – traveling is so exhausting!  I think we’re going to head out and do some grocery shopping (I’ll update you on the Thanksgiving Challenge later tonight) and possibly use our meal out this week for dinner.

Be sure to check out Grounded Fitness for a giveaway!

12 Replies to “I’m home! And a salad challenge update.”