Hello everyone! My name is Bobby and I’m the boyfriend. Since Maggie is a bit busy with work-related work I am going to do tonight’s post!

After a much-needed post-travel nap I woke up and found that Maggie had already woken up and was doing yoga. I decided to check some email and when she was done we both decided to go out and get some groceries.

We stopped by Milk Pail and Trader Joe’s and got a lot of food. For those of you keeping up with the Thanksgiving Challenge, Maggie will post some details about that later (probably tomorrow).

After shopping we had dinner at one of my favorite places in Mountain View: Garden Fresh. It’s a vegetarian/vegan Chinese restaurant and take it from me (a non-vegetarian) – it is just amazing! All the entrees are cheap (under 10 dollars) and brown rice is always included.

Maggie and I shared a Grilled Salmon Filet dish.  I think it has been our favorite dish since we started going to this place. The “salmon” is actually made from a tofu/veggie meat and is wrapped on the edges by seaweed, which makes up the “skin”. It was served with a delicious sweet brown sauce with peppers and chestnuts and bamboo shoots. I couldn’t get enough of it. 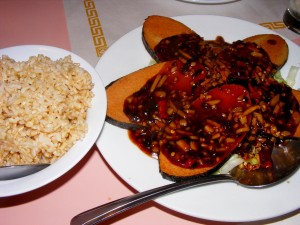 Both Maggie and I had some brown rice (we had to get another bowl).  Maggie also ordered a house salad and I had a cup of hot & sour soup. 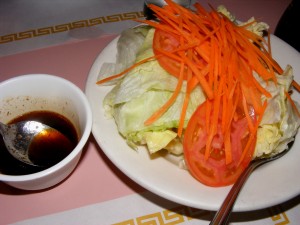 For dessert, Maggie and I had some red grapes that we had bought from Milk Pail. 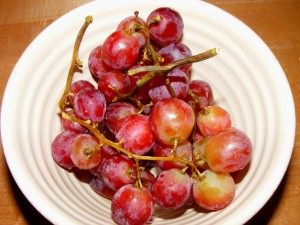 All in all, it was a very relaxing evening and a nice way to get back into gear after vacationing.

Okay guys, I’m back 🙂  I’ve been a bit busy tonight because I had to miss work today, so I want to thank Bobby for taking over posting responsibilities.  We had a bunch more grapes throughout the night and I feel very satisfied right now.

I haven’t had brown rice in a while and it was nice and filling.  I think I had a little more than a cup (cooked portion).  I also had a large piece of that delicious Salmon Filet that Bobby talked about.  I did have a few more bites of rice and filet out of the takeout box about an hour ago because I was still a little hungry and the grapes weren’t cutting it.  But I’m going to bed now!  I want to get up early to head off to work.

Hope you all had a great Monday – this is the last full week before Thanksgiving!  And thanks for all of the great responses to my board game question.  We’re trying to pick out some of our favorites to buy and those were all great ideas.  Have a great night.