I found a fantastic blog this weekend called Just Bento.  She posts ideas for complete bentos, as well as many simple and delicious recipes.  I tried (and modified) one of them.  Here is the original recipe.

For mine I cut back on the oil, added more carrots, and some cinnamon.  Here’s my version: 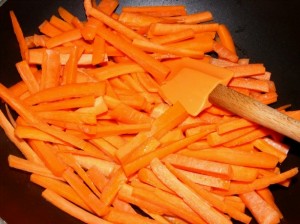 Whereas most kinpiras include sugar as an ingredient, it’s unnecessary here.  The carrots are sweet on their own and the cinnamon brings out the sweetness even more.  I hope you enjoy it!

Bobby says, “It was very delicious!  But a little spicy.  But that probably means it’s increasing your metabolism!  I learned that from Maggie.”