This morning I woke up and did a 75-minute Dave Farmar yoga podcast.  It was the podcast from 9/19/08, and it was fabulous.  There was one sequence where he made us go from crow to chaturanga 3 times in a row, and my arms were begging for a rest.  There were some awesome flows, and at the end he held pidgeon for ages (several minutes probably?).

Before I went into savasana I added a bridge (5 breaths), a handstand, and a headstand.  I still do handstand and headstand next to a wall for security.  How long did it take you to do these poses away from a wall? Most of my practice is on my own, so I didn’t try a headstand until about a month ago when I took a class and the teacher taught me the right technique.  Since then I’ve been working on getting my balance.  I also learned handstand about a month ago, but to be honest I don’t practice that one as often. 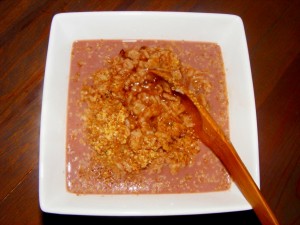 After my shower I made another batch of stovetop oats for breakfast.  I got daring today and added wheat germ.  In this bowl:

My heart-healthy portion of oats from yesterday kept my hunger at bay for over 4.5 hours, which is truly incredible for me.  I usually end up snacking on fruit less than 2 hours after I have breakfast, but I didn’t even think about lunch until 3p (I had the oats at 10:30a), and I could have held off longer except that eating lunch after 3p would have been a little ridiculous.  This breakfast is a keeper.