I made Bobby oats for breakfast!  He liked them very much.  He grew up having oatmeal, but got bored of it (no fun toppings). 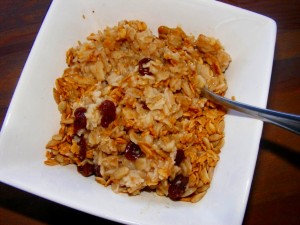 Bobby says: “It was very good.  The sunflower seeds made it a little too salty.  Raisins were good.  Honey was good.  Granola was good.  But sometimes I couldn’t tell the difference between granola and oatmeal because they’re both oats!  It was fun to eat it with a spoon.”  He’s in a silly mood. 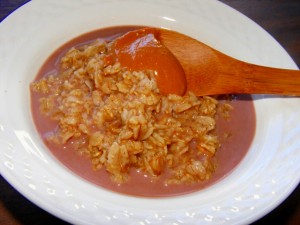 I also did a lovely hip-opening yoga routine this morning.  It was free of course!  Check out Eoin Finn’s podcasts.  The class I did this morning was called Tragically Hips, and really focused on getting loose.  Eoin started out with some very quick sun salutations (A and B), then moved onto some vinyasas, sitting poses, and minimal ab work.

This is not an mp3 for beginners – not that the poses are too difficult, but he focuses less on the basic instruction (“inhale, look up, exhale, fold forward” type of thing) and instead on other types of guidance.  He pointed out some mistakes that I had been making, probably because after a while we all become comfortable in our own routines.  I liked this a lot actually.  The pace is quite quick at first and if you were new to yoga you could become lost.

The only modifications that I made were to skip his 2-minutes of forward bending at the end (I hate forward bending) and do wheel instead.  I also did headstand at the end for a good 2 minutes.  This was actually my best attempt at headstand yet.  My feet tapped the wall once when I went up and I managed to hold it after that.  I was very happy.

This afternoon I’m going to make my week’s menu plan, and probably go for a leisurely walk with Bobby.  We’ll watch the superbowl, but I’m only in it for the commercials!  Who are you rooting for? I guess I’ll go with the Steelers because I’m from PA/NJ.

13 Replies to “His and Hers Oatmeal & Hip-Opening Yoga”