Janny from POM Wonderful sent me a case of POM’s pomegranate juice to try last week.  POM’s juice has a whole slew of benefits – their site claims that it promotes cardiovascular and prostate health and is an “antioxidant superpower”.  The case that I received was expired, but only by a few days… so I tried it anyway.  I’m okay so far. 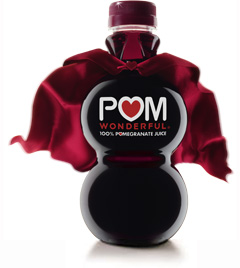 POM’s juice is very strong – it has a strong and tart flavor, which I really liked.  If I were into drinking my calories I would probably be all over drinking this plain.  Instead, I diluted mine with some seltzer water – it was really good!  (This was pre-macrobiotic experiment; I don’t think seltzer would be very macrobiotic.)  Bobby tried it as well but he couldn’t drink it unless it was diluted with a lot of water.

I’m submitting this post to The Chic Life’s Weekly Food Challenge – pomegranate juice!  I saw Lee do this the other day and I couldn’t resist.  I poured some POM juice into my shampoo, conditioner, and bodywash.  I love it! 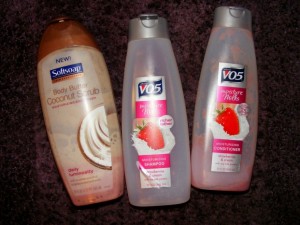 I think that POM juice would be a good sweetener in baking as well.  One thing I’ve learned about macrobiotics is that it’s good to use natural fruit juices to sweeten things rather than processed sugar.  I’ll be sure to update you if I decide to try it out.

Here’s my first dinner (I ate some fruit and a few whole wheat wraps later on = “second dinner”) – this was baked kabocha squash and carrot soup.  I did end up putting organic ketchup on the squash, but that was iffy – things in the nightshade family (eggplant, tomato) should be used sparingly, and sugar is a no-no.  I’m learning a lot, and I think that the major thing that I’m taking away from this experiment so far is that I need to ease into this.  It’s not like going vegan/vegetarian, which I can do immediately – this is a much longer and more intricate process. 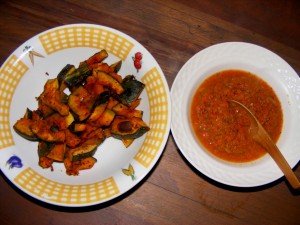 I’m diggin’ it though.  I’m having a lot of fun.  What is one food that you could/would never give up? A week ago I would have said yogurt, but I’m not so sure anymore.  I’m gonna go with squash for now, just cuz I love it.