I’ve been up since 3am (when Bobby went to sleep) – insomnia much?  I crashed around 10:30pm last night though (very early for me).  So I decided to just get out of bed, call my mom (who is on the east coast, and 3 hours later than me), watch the news, and make a post.  It’s peaceful being up this early.  I might do some morning yoga or go for a walk when it starts to get light out. 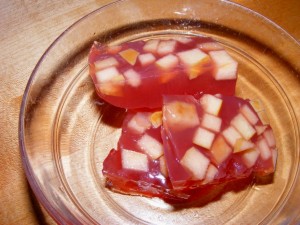 I finally discovered the amazingness that is agar agar powder.  Who knew you could make such a nutritious, yummy dessert in about 10 minutes?  Agar agar comes from seaweed.  It’s very popular in Asian desserts, especially in Japan.  It’s a vegetarian/vegan substitute for gelatin too.

Since I’m kind of a linguistics nerd – agar comes from the Malay word “agar-agar”, meaning jelly.  Other names are kanten, China grass, and Japanese isinglass.  Cool, right?  There was actually a diet fad in Japan called “the kanten diet” where you eat it with every meal. 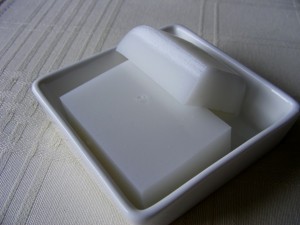 I liked the subtlety of this dessert/snack – usually Jell-O is sickeningly sweet, but that was not the case at all here.  Bobby thought the flavor was almost too subtle, but I liked it.  If you do want to sweeten it, just add sugar/other sweetener to the water and agar mixture and let it dissolve. 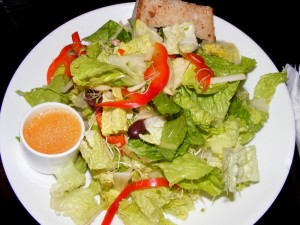 I got this salad at Sprout Cafe the other day with lunch – I don’t remember what was in it though.  I know there were lots of kalamata olives, which I love.  They are one of my favorite salad additions!  The salad dressing was a chili-lime vinaigrette, and it was wonderful.

Do you ever get insomnia or wake up really early?  What do you do?