I enjoyed another lazy morning in bed… I don’t mind it.  I like staying up to snuggle with Bobby.  I end up sleeping a little later, but it means having more time to spend with my hard-working sweetie pie.

I did 2 of Polly’s yoga videos this morning – yoga for core, and yoga for hips #1.  Polly’s videos are fantastic and I hope you all try them.  She makes yoga fun and meaningful! 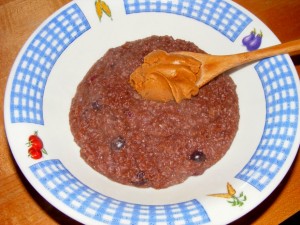 Breakfast was oat/wheat bran again, with double blueberries and no banana.  Dash of salt, stevia, and vanilla.  And a monster peanut butter spoon.  I think I’m going to have to make the trek to Palo Alto to get more Mighty Maple.  I miss it!  (There was unpictured miso soup as well; always!)

Check out this awesome salad I made last night (I’ve been having a big salad + pitas with peanut butter for dinner… yum).  It was so colorful – carrots, tomatoes, fresh kalamata olives, napa cabbage, sauteed spinach, and microwaved kabocha.  The dressing was a mix of PB2, chili sauce, and some newman’s own lowfat sesame ginger. 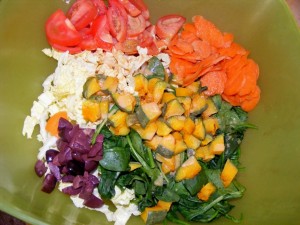 Housing update:  I spent this week and last weekend looking at so many apartments and houses.  We had decided that buying was a possibility, so we looked at several houses in east San Jose that were in our price range.  They were all in terrible condition and in not-so-nice neighborhoods. 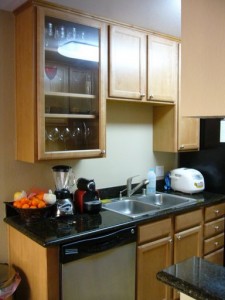 Then I finally found a beautiful condo yesterday that we are going to rent for the next year (possibly longer).  It’s in Sunnyvale, and it has a wonderful kitchen.  I’m going to be spoiled.  It also has a washer/dryer in the apartment.  It has a big balcony as well.  We’re signing the lease tonight.

After we sign the lease, we’re going out to eat… probably at Blue Mango/Cheesecake/Jang Su Jang (Korean).  My entire menu plan fell through this week (because Bobby had so much pressure at work) so I’ve been mostly eating at home.

What are your weekend plans?