I took a Hatha Yoga class (90 minutes) yesterday at noon.  I like this teacher (Julianne Rice) because although it’s generally a beginner class, she will definitely pay special attention to you if she knows you can go further.  We did a lot of strength work (plank variations) and Julianne helped me to finally find my true bow pose (I had no idea that this is one of the expressions of the pose): 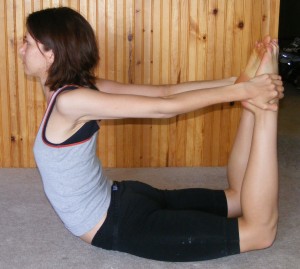 It felt so much better than before!  I have always hated bow pose, but now I cannot get enough.  I was hopping off the couch every few minutes yesterday just to keep trying it again.

It’s a little bit hard to get into: you have to bring yourself over the hump of your pubic bone.  You need to really use your legs (especially your knees – I know the knee is not a muscle, but that’s what it feels like) to lift up and over!  You may want to put a blanket under your hips to make it more comfortable.

After yesterday’s great class, I decided to hop back on the yoga train. I have my next YogaFit training (level 2) coming up this weekend and I want to be very prepared for it. (I’ve been doing daily yoga, but mostly just 20-30 minute yogadownload sessions.)

Today’s class was a Dave Farmar podcast – “090106 Power Yoga with Dave Farmar“.  It was recorded in January of 2009.  It’s 75 minutes long; it starts out with sun salutations (some speedy ones), then gets into some deeper holds, a few crazy beautiful vinyasas, and ends up in a looooong pigeon hold.  He focuses on headstand throughout the class and offers that as a resting pose in addition to the down dogs and child’s poses.

After this class I made the same soup as yesterday – again, refreshing and just what I needed this weekend. Did you have a good weekend?  I’m feeling relaxed and ready for a new week!