I’m always jealous when Sarah goes to Sweet Tomatoes.  When I found out that there’s one less than 2 miles away from our apartment, I had to go.  Bobby let me pick the restaurant tonight, so I took us to this lovely salad buffet feast.

I was going to do it right and listen to Sarah – 2 plates – one for business and one for fun – but then these awesome broccolis (joan’s broccoli madness) hopped on the business plate and my plans went out the window.  I had 2 plates, and they both looked pretty much the same – 2 party plates!  Okay, they weren’t completely party plates – it was more like a business/party mix both times.  Some of the things that I remember dumping on these plates… 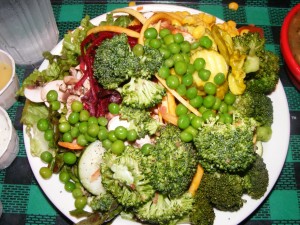 I also had some of Neighbor Joe’s Gumbo – I mostly just picked out the okra, tomatoes, and chicken. 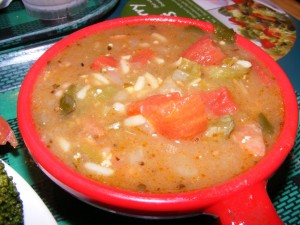 Yum!  I also dipped the salad in the broth as kind of a dressing.  After I stuffed myself with salads, I had to have dessert. 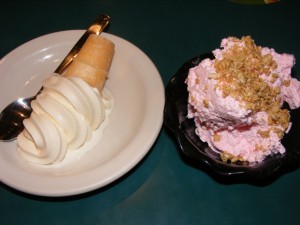 The mousse was so good in all of its sugar-free glory.  I haven’t touched the fake stuff in a while, but the splurge was worth it.  I might have accidentally ended up eating about 3 cups of this stuff.  But it only has 40 calories in 1/2 cup, so I think it was okay.  I didn’t have much of the froyo because the mousse won me over early on.  I was really full for about an hour afterwards, but it’s going away now. 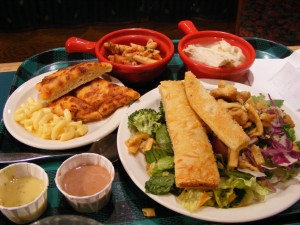 Overall I was really pleased with tonight’s salad extravaganza.  Sweet Tomatoes is an awesome restaurant – it’s basically a buffet for salad lovers.  They have some other random items (teeny pizza slices, soups, pastas), but those are not the main event.  This place is all about salad.  Everything is labeled really well, and you know exactly what you’re eating.  They also have a very comprehensive menu with nutrition facts online.  I was really impressed with the restaurant itself – everything was incredibly fresh, and they had a great selection.

Have you been to Sweet Tomatoes?  What do you get at salad bar buffets?