The folks over at Nature’s Path sent me an incredible package of products to sample.  Their “minifesto” is:

At Nature’s Path, we live for healthy, great-tasting organic foods. It’s why we get up in the morning. But we are also a company that wants to do more than just sell breakfast foods.

In the package  (THANK YOU Nature’s Path!)… 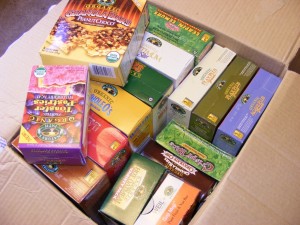 The package got here just as I was about to make breakfast, so I decided to sample the oatmeal first.  I picked the Multigrain Raisin Spice. 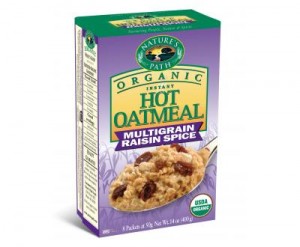 I used 1/2 packet and 1/3 cup oat bran to make this delicious bowl of green oats: 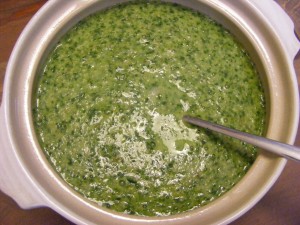 Review:  The oats were fantastic.  Sweeter than normal.  The oatmeal plumped up nicely when it cooked – it had a great volume – possibly even more voluminous than oat bran??  I loved the texture and the taste, and I only wish I had added more spinach, because this bowl was sweet enough to handle a lot more that what I used.  The only downside – so much sugar!!  18 grams in one packet is a lot – I only used a half packet (mixed with oat bran) because I try to stay away from excessive amounts of sugar.

I had another bowl for lunch, and this time I decided to use the Flax Plus flavor. 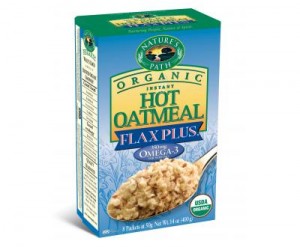 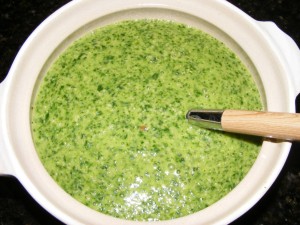 Review: Same prep as before (1/2 packet + 1/3 cup oat bran) + a spoon of natural peanut butter.  I liked these nutritionals a lot more than the raisin flavor, and the oats did not disappoint either.  I assumed that they would be sweet, so I did add some extra spinach for greens.  The flavor was subtle and the texture was nice and creamy (just like the raisin one).  Again, very voluminous.

This morning I went for the third flavor – Maple Nut. 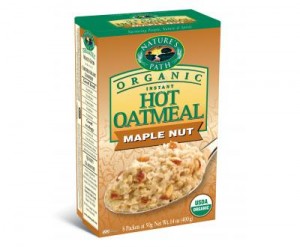 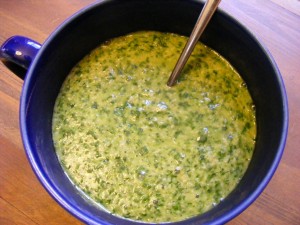 Review: Same prep as before (1/2 packet + 1/3 cup oat bran).  By now I’m getting a bit tired of sweet oats.  The flavor was good, but the maple was a bit overwhelming (and I diluted mine with oat bran – I can’t imagine what it would be like to just use the whole packet).  I wish that the nuttiness had come through more.  I added a lot of spinach and these oats were still incredibly sweet.  I can still taste the sweetness in my mouth.  I would definitely recommend these for someone with a sweet tooth, because the flavor was wonderful, it was just a bit overpowering for me.

Overall:  I really like these oats.  They are fluffy and voluminous, which is the major reason that I usually choose oat bran over oatmeal.  The serving size is also good – 50g is a lot more than you would normally get in an instant oatmeal.  It’s about 1/2 cup.  I find that I always have to put 2 instant packets together, but I think that these packets are big enough so that you can use just one, with some additions like spinach or granola or peanut butter.  The packets are too sweet for me, but I think they would be great for most normal people.  So far my favorite is the Multigrain Raisin Spice (even though it has more sugar than the Maple Nut, it wasn’t overwhelming; it has more character than the Flax Plus).

To elaborate on why I think these oats are so sweet – I’ve pretty much cut out all sugar from my diet in the last few weeks.  At first it was accidental, but now I like it.  I think that my taste buds are changing.  I’m actually feeling a little bit of a sugar high right now from the Maple Nut flavor, but I don’t like it.  It feels like how I feel after I eat MSG (ugh – slightly dizzy, and some pressure in my head).  I haven’t even had fruit (aside from the few raisins that I normally put in my oat bran and the can of jackfruit that I opened last night) in a few weeks either.  I’ve found that I can pretty much eat as much as I want, whenever I want, as long as I’m not eating sugar.  Kind of crazy.  And I’m not craving apples anymore.  What?  I used to eat 6 pieces of fruit in a day.  I don’t get it.

(Wait – I stopped eating sugar “accidentally” – because I just wasn’t craving it – right after I went off of the birth control pill.  Coincidence?  I don’t know.  Has this happened to you?)

I’ll try the Apple Cinnamon flavor later today, or tomorrow… stay tuned.  I also tried the kids bar, but I’ll save that for later too (it was yum).

What’s your favorite flavor of oatmeal?  Or favorite oatmeal topping?  I love oat bran + raisins, blended.  (With spinach of course.)