Last night Bobby and I hosted our very first dinner party!  We invited over our cousins, Miwa and Armand, and we had a great time.  Bobby and Armand are so similar and Miwa and I are really similar as well.  Bobby and Armand discovered that they went to the same comic convention thing (Comic-Con or something) a few months ago, and they both talked about how they didn’t want to drag me and Miwa along.  They see the same movies we do, so I think we’re going to see something with them soon.

We spend a few hours cleaning and getting ready.  I made a few different things… 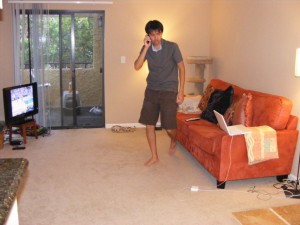 Caesar salad – hearts of romaine, olive oil, lemon juice, salt & pepper, lots of parmesan.  (Got this lovely Mexican bowl on sale at Kohl’s a while ago – it was on super sale.) 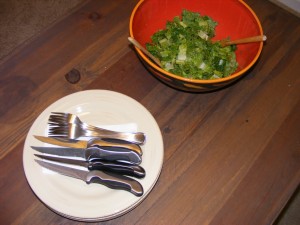 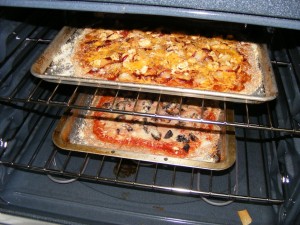 I have a very secret awesome recipe for pizza dough, and it’s awesome.  Even better than the recipe that I have posted.  If you want some guidance, feel free to e-mail me for it. 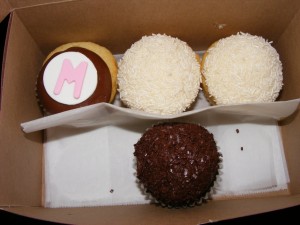 Miwa and Armand brought over a surprise dessert – cupcakes!  (I forgot to take a pic before we started eating them.  There were 6 to start.)  They are from a place on Santana Row called Kara’s Cupcakes and they were the BEST cupcakes I have ever had.  Miwa tried the “M” one (the M’s were for mother’s day, but since Miwa and I both have names that start with M it worked out), Armand had a chocolate, and Bobby and I split a vanilla.  The icing was so soft and fluffy, the cake was light and airy, and even though they were really sweet, I liked them.  Amazing.  Even cooler – Kara’s uses local ingredients, and they are organic and sustainable whenever possible.

I had so much fun cooking, cleaning, and hosting this party.  We almost finished the pizzas, so I think they both liked them.  The bbq chicken was a definite winner and I’ll be making it again very soon.  Do you like hosting parties?  What’s your favorite meal to serve?