After Bobby and I got back from our Mayercraft Cruise, we started following John Mayer on Twitter (follow me!).  One of the first things he tweeted about was this cool soda machine made by Sodastream.  We wanted it, but didn’t want to fork over the $130 bucks for the value kit (there’s a cheaper start-up kit for $90, but with shipping it’s almost the same price as the value kit which has free shipping). 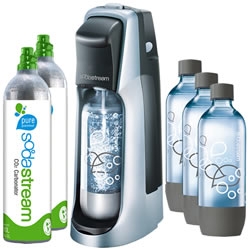 So we didn’t get it.  But then I saw it on Herbivoracious, and I wanted it again.  There are so many benefits to making your own spritzer/soda at home!  It’s environmentally friendly because it reduces packaging…

And it saves energy…

Not to mention that it’s convenient!  We finally decided to order it last week, and it arrived just 2 days later.  The value pack came with the Fountain Jet Soda Maker, 2 x 110-liter carbonators, and 4 x carbonating bottles.  They also threw in a free pack of soda samples (12 flavors; 6 diet and 6 regular) and 3 flavors of spritzer (berry, orange, and lemon-lime).  I found a 10% off coupon online so that basically paid for the tax and a $5 bottle of root beer flavor (makes 12 liters) that Bobby wanted.  We opted for the silver and black (to match the kitchen) but they have red and white as well.

The process to make the seltzer water is simple.  Screw in a bottle of chilled water: 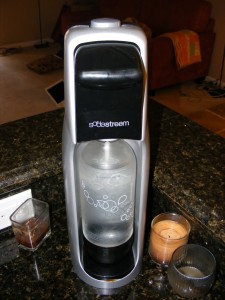 Press the button on top a few times until you hear it make a buzz noise.  Then press it 2-3 more times after that and remove the bottle. 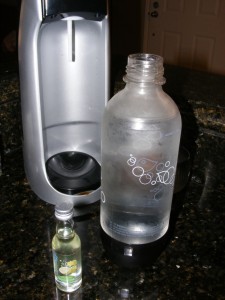 Add flavoring (optional), put the cap on, and gently turn it up and down a few times.  Drink! 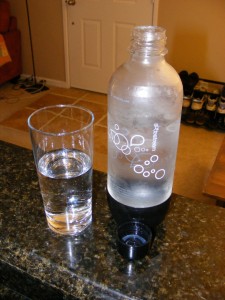 The flavors are made with real sucrose and some Splenda (no HFCS) and the diet flavors are made with Splenda (not great, but at least it’s not aspartame).  I actually prefer the real soda.  I dilute it a lot because you don’t need much!  My favorite flavor is orange.  Bobby only uses half of a flavor pack at a time to make his soda as well because it’s very strong.  The nutritionals are great though: 8 ounces of this soda has ~35 calories whereas 8 ounces of Coke/Pepsi/other soda has 100 calories!  (And since we only use 1/2 a packet it’s only ~17 calories per cup.)

I still think soda is pretty awful, but if you’re going to drink it – this soda is probably your best option.  I mostly drink the seltzer flavors – my favorite is orange for this as well.  I’m a major seltzer addict and I’ve been chugging it like mad.  I’ve finally found a way to stay hydrated and get my 8-12 glasses of water each day.

Overall – I highly recommend the Sodastream soda maker.  Go out and buy it!

Do you like soda?  Seltzer?  Diet soda?  What’s your favorite flavor?  I used to drink diet soda but I’ve stopped now.  I never really drank soda as a kid except for the rare “treat” occasion.  My favorite flavors were always Sprite, 7-Up, Mountain Dew, and Orange soda.  I hate Coke, but when I drank diet soda it was always Diet Coke or Diet Root Beer because those seem to be the ones that are always available.