I made a very cool and very Japanese/Macrobiotic dinner last night in an attempt to declutter my kitchen and use up pantry items. 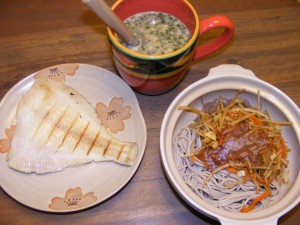 I started with this Soba Noodle & Umeboshi Dressing recipe that I’ve been obsessed with, but I had to make a few adjustments.  This was soba noodles topped with julienned burdock and carrot (frozen).  I had a few shirataki noodles for bulk, but it was mostly soba. 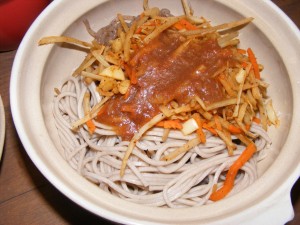 Then I made miso soup for each of us (from a packet, but again… trying to use up pantry items). 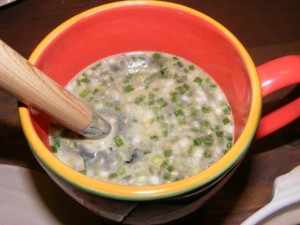 And I also grilled some frozen Rex Sole that I’d gotten at the Korean grocery a few weeks ago.  The sole was actually really delicious (I ate my whole piece plus part of Bobby’s – he’s not really a whitefish person) and now I want to buy more of it.  So that was a fail at pantry cleaning (unless I resist the temptation to buy more). 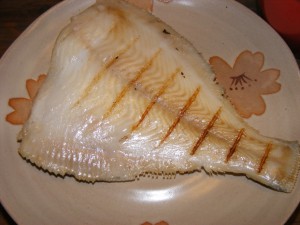 I’ve actually managed to use up some other pantry items – I made chocolate/raisin/sunflower seed/oatmeal cookies for bobby (oatmeal raisin is his favorite) with the rest of my instant oatmeal (it’s sweetened, and I just can’t deal with that much sugar… I tried), nuts that I never eat, and raisins and chocolate that have been waiting to be cooked.  He took them to work with him so they’ll probably disappear soon.  I also sent him in to work with a big bag of granola bars so he’s going to try to have them for snacks.  I’m totally over bars, and have been for a while.  Just not my thing.

The point of cleaning out the pantry is to use up all those things that I bought at one point and then discovered that I didn’t really like, or didn’t like as much as I thought I had.  I’m making good progress I think.  By the end of the month a decent amount of the excess food will be used up.

I just found out what my summer schedule is going to look like – I’ve decided to teach full-time for a few months instead of taking classes at community college.  I’ll be teaching summer classes for SAT prep, Algebra 2, and Trigonometry.  Fun!  I hope it will be 🙂

My mom comes tomorrow night!  I can’t wait to make her eat green oatmeal and kabocha.  Have you ever made your parents try something that they thought was kind of crazy?

17 Replies to “Japanese Dinner for Decluttering”