I decided to keep it simple with my chayote since I’d never had it before.  I chopped it in quarters and discovered a soft, pit-like thing.  I discarded it.  I probably could have kept it… but I didn’t know? What do you do?

Then I chopped it in pieces. 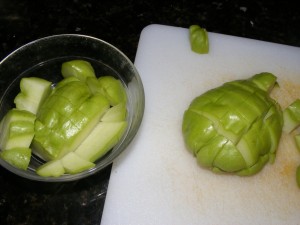 And I sauteed it with sesame oil, grated organic garlic, and chili powder.  First I heated the oil and added the garlic to let it get crispy, then I added the chayote and chili.  I used a cast-iron skillet (Wagner Ware, really old, from my Grandma) which is my new obsession. 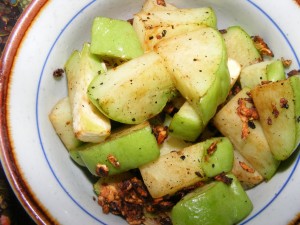 It was good.  It didn’t really taste like much besides garlic and chili powder (which I do love).  I think it tends to take on the flavors of whatever you cook it with.  I would definitely get it again, but it’s nothing terribly special.  It’s cheap too, which is always good.  I think it was about $0.79/pound, but I don’t remember exactly.

While I was cooking I snacked on a few pieces raw, and they were good too – nice and refreshingly crunchy.  I think it would be good on a salad.

I did a litle research on chayotes – they’re members of the gourd family (melons, cucumbers, squash).  It’s native to Mexico.  Apparently the root, leaves, stem, and seeds of the chayote are all edible – but we usually just eat the fruit.  From Wikipedia: “The leaves and fruit have diuretic, cardiovascular and anti-inflammatory properties, and a tea made from the leaves has been used in the treatment of arteriosclerosis and hypertension, and to dissolve kidney stones.”

Sounds good to me!  Will you try it? I got mine at the Asian market but they’re also in Whole Foods, Mexican/Latino markets, and sometimes even regular grocery stores.

Hope you’re all having a lovely weekend… I went to the farmers’ market this morning but didn’t get anything.  I also did some yoga and made an interesting bowl of green oat bran, which I’ll post about tomorrow probably.  Enjoy the day 🙂

16 Replies to “As promised… Chayote!”