Holey Donuts was kind enough to send me some samples to review a few weeks ago, so here’s a review. Holey Donuts sells a healthier version of donuts online – they’re not “diet” donuts, but simply donuts prepared in a way that makes them lower in fat and calories. The donuts aren’t fried but they’re not baked – Holey Donuts seems secretive about how they prepare these delicious donuts.  They send you boxes of frozen donuts (in very good packaging).  You can freeze them for a while (months, at least) and just reheat them when you’re craving a healthy-ish donut.  It only takes about 30 seconds to prep these. 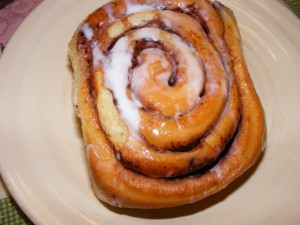 Wow.  These are delicious.  I love the blueberry and the regular.  The Holey cinnamon buns have only 340 calories apiece (compare this to the 1000+ calories at other places) and they are honestly the best buns I’ve ever had.  They’re fluffy and light and have the perfect amount of glaze.  Bobby loves them as well and he was shocked that they are semi-healthy. By the way, they are HUGE.  They’re almost the size of my hand. 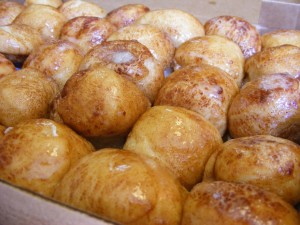 Nom nom.  These have 160 calories in 4 holes (compared to 200 at Dunkin).  But they’re bigger, fluffier, and way better than any other donut holes.  The glaze is great – sweet, but not sticky – and the cinnamon flavor is strong.  A perfect snack. 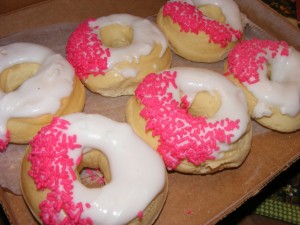 These guys are plain old frosted donuts with some yummy pink sprinkles. But they taste anything but plain and old!  They’re fluffy, like the other varieties, and lack the grease factor that regular donuts have.  I don’t know how Holey Donuts makes these donuts so fresh and donut-y without frying them, but I don’t care.  I’m just going to keep eating them.  They have the right amount of sprinkles (not too many) and just enough glaze.  When you heat them up the glaze oozes over the donuts and melts in your mouth.  Yum.

A bunch of filled donuts (I forget which flavors they were, and now they’re gone.  One was banana something, one was blueberry, and one was raspberry (2 of each)): 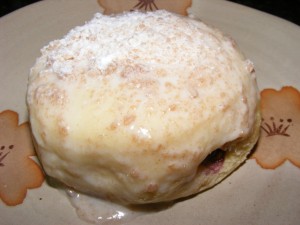 I am usually not a fan of gooey filled donuts, but I really enjoyed these.  I think the one pictured is blueberry something.  I love the way the glaze melts when you heat them up.  It’s thin enough so it’s not overpowering, but really enhances the fluffy holey donut.  Bobby agreed that these were perfection.  His favorite was the raspberry and mine was the blueberry.

I would definitely order these the next time I want some healthier donuts.  I want to try the other flavors!  I hope you get a chance to check out Holey Donuts as well.  They usually have cool promotions going on, like a free pack of donut holes with another purchase.

What’s your favorite donut?  Mine are cinnamon buns 🙂