I finally got around to trying this new idea that I’ve been seeing recently. I think Heather started it, and I also saw it on Kath’s blog and Brandi’s blog (which was also on HealthyYum). It’s oat bran in an almost-empty nut butter jar. 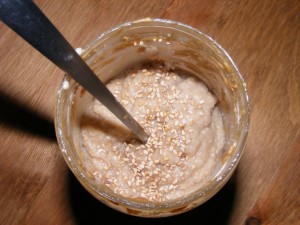 When I got near the end of my Trader Joe’s peanut butter (all natural, salted), I used it as my “bowl” for oat bran. I believe this was a batch of PBU oat bran (oat bran cooked with pbu – peanut butter and chocolate milk blend) simply topped with sesame seeds.

Another yum that I had recently (Sunday night) was this bowl of soy frozen yogurt from Fraiche, topped with sunbutter (sunflower seed butter; I brought it with me from home). I also added cinnamon, nutmeg, and cocoa powder. I ate this before I saw Food, Inc. and was very pleased with myself for making a good choice. 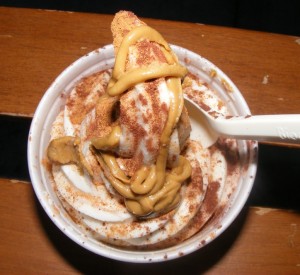 And, because I can’t get enough of sesame seeds, I thought I would share some more sesame seed loving. 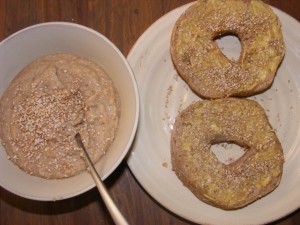 Even Bobby is addicted.  That’s my bowl of oat bran and his bagel (with mustard), both doused with sesame seeds.

Last night’s Coldplay concert was really good.  They are great live and I loved the music. I was annoyed that the show started at 7pm and Coldplay didn’t even being playing until after 9pm.  They had 2 openers and both were just okay. I honestly don’t like seeing the openers at shows – I paid to see Coldplay, and I wanted to see them! By the time they got onstage I just wanted to go home. During the show they played a cover of Billie Jean, which was a nice tribute. Overall I had a good time, and we scored $10 tickets to see The Fray, Jack’s Mannequin, and Vedera in a few weeks.

Before I forget, Holly tried her first kabocha! She loved it (duh). I’m doing well with my kabocha challenge (eating less of it) – the last two nights I only had 1/4 of a kabocha each night (with nut butter).

Off to do some yoga, worky stuff, and make Bobby lunch. Hope you have a great Tuesday 🙂