Instead of going to the mall yesterday, I spent an hour or so reading in Borders. I read Natalia Rose’s newer book called Detox For Women – it’s another raw food book, but it’s focused on detoxing and going raw specifically regarding women and women’s health. I will probably buy it; just a few pages in I was nodding in agreement as she began to elaborate on symptoms and conditions that some women experience.

One of the things I took away from reading yesterday was a new exercise – rebounding. Rebounding is jumping on one of those mini-trampolines. It has a slew of benefits, including (but not limited to):

This morning I went over to the rec room and did 30 minutes of rebounding while I watched The View and an infomercial on Wen haircare products. The time flew by and I felt energized when I finished. I did about 15 minutes of yoga (on my own) afterwards, just to stretch and chill.

I have a bunch of raw salads to share, so here’s the first. It’s from a few days ago. 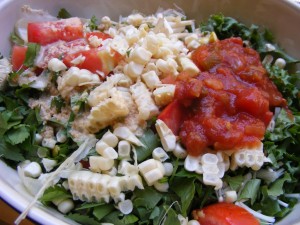 It was pretty awesome. I’m actually going to try to stay away from peanuts and peanut butter for a while, because… 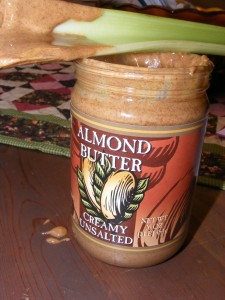 Words of the day:

P.S. Don’t go away… I’m back to my kabocha-loving ways and I have a lovely recipe to post tomorrow.

25 Replies to “Rebounding Along”