I thought I would share some of the things I’ve made for Bobby recently.

We have been watching Dexter obsessively and we’re now midway through the third season (the fourth one premieres in the end of September). There was a character in the second season that ate cucumber and cream cheese sandwiches for lunch every day, and Bobby wanted to try them (he never had before). I was shocked, so we immediately went out to whole foods for some soft whole wheat bread and cream cheese. 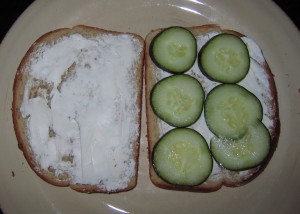 It was simple to prepare – 2 pieces of bread, cream cheese on both sides, and sliced cucumber. Some dill would be a nice addition. He loved it – it’s a new favorite.

Another nice meal was Whole Foods lamb (on sale this week) with wild rice and grilled red peppers and fuji apples. I stole a few bites of this and it was delicious. It was another new thing for Bobby – he doesn’t think he’s had lamb before, but he really liked it. I love lamb – I just don’t have it that often. It was a nice treat. 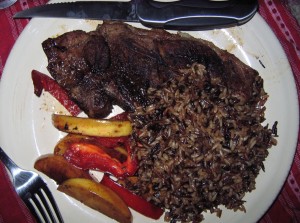 I was influenced by Dexter, too – there was an episode in which Deb started listening to Chopin, so I downloaded a CD of “Favorite Piano Works”. I used to play piano (I suppose I still can) and they make me miss it.

I signed up for an Anthropology class at a local community college, and it meets tonight. It’s once a week for 3 hours on Wednesday nights. It’s a Physical Anthropology class – “The study of human origins, including evolution, genetics, variability, fossil evidence for human evolution, comparative primate anatomy and behavior.” I’m pretty excited for it.

I found a ridiculous word this morning – floccinaucinihilipilification – it means “the action or habit of estimating as worthless”. I think someone needs to estimate floccinaucinihilipilification as worthless. It’s a combination of 4 Latin words (flocci, nauci, nihili, pilifi) that all mean “at a small price”/”for nothing”. Apparently uber-literate British men used to make up words like this all the time just for fun. I just wrote a piece on crazy English spelling which was also influenced by British men wanting to seem smart or dandy.

What’s your favorite after dinner treat?