I have been giving out my own version of the Liquid Gold Elixir recipe to a bunch of people through email, so I think I should just post it. The original recipe is by Natalia Rose.

Blend everything in a food processor. It really does come out gold, and tastes like the elixir of life. It’s fabulous.

Another raw recipe that I tried (finally) is Gena’s Banana Soft Serve. It was so awesome! 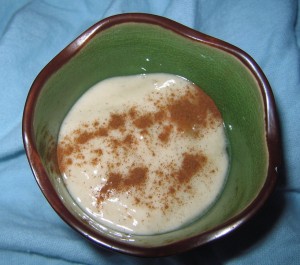 I took 2.5 bananas and blended them in my mini food processor for 2-3 minutes. I probably could have gone on for longer but it was 11pm and Bobby said I was probably waking the neighbors. I topped it with cinnamon.

If you haven’t seen it, Clare did a very cool post about Vinyasa (and I helped with the etymology = word origins).

And I wrote about the English alphabet (it hasn’t always looked like it does today!).

A sweet reader sent me this recipe site and I’ve been ogling over the healthy recipes. I might try some out!

Bobby and I did Yogadownload.com‘s Sun Salutations Flow #2 (Dave Farmar instructing; ~25 minutes). We are going to do yoga together today, too. Before yoga I did 15 minutes of rebounding and then I did 15 more afterwards.

Stay tuned for some resolutions tomorrow 🙂 September and Fall make me feel refreshed, happy, and motivated! I also love September because it’s my birthday month – I’ll be 23 in less than 2 weeks. Scary.

23 Replies to “Some raw recipes”