Oh yes I did. It’s shredded. On a salad. 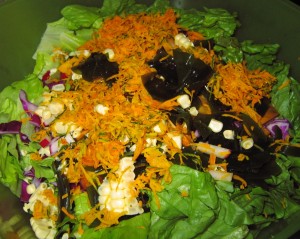 The other fun topping was a bunch of radishes: 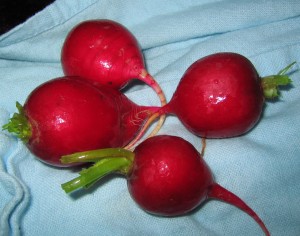 I saw them at Han Kook (Korean grocery) and nabbed the bunch for $0.50. They were kind of bland. I like my dad’s homegrown ones better.

This morning I was up early (5am! why? I went to bed at 1am!) and after lying in bed for 1.5 hours after waking, I gave up and decided to be productive. I got in a nice 35 minute yoga flow (on my own, to Chopin) before I drove Bobby to a networking class over at Mission College (where I’m taking my classes) and then I went out to a new farmers’ market (new to me) in Santa Clara where I bought way too much produce. Now I’m lounging, but I think I’ll go read or do a GRE essay practice (still haven’t done this… putting it off). I also want to get some rebounding in today.

Hope you’re all having a great weekend 🙂