I can only think of two things that were lazier than Bobby and I were today. 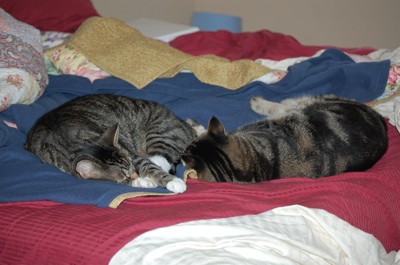 Our two fats cats. (Cous and Bo = Couscous and Kabocha.) Oops, look at those dirty socks on the floor. 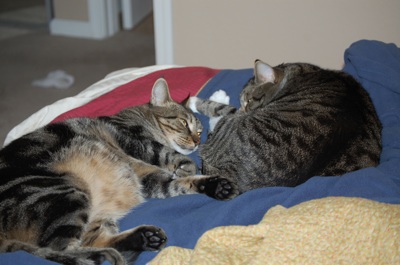 I did actually manage to give Bobby a haircut, so maybe the day wasn’t so unproductive after all. He’s playing some xbox game here. It has something to do with Japan. Sometimes I “help” him play by watching out for the red dots (those are the enemies) and pointing excitedly. I think I did a good job on the hair; this was my second time cutting it for him. 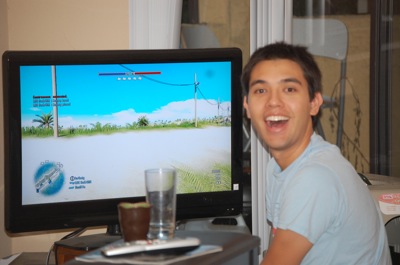 I also did an easy walk on the treadmill tonight (1.8 miles, 3% incline) while Bobby ran and lifted. When we came back inside I did some nice stretching exercises inspired by Diane von Furstenberg (more on that later). 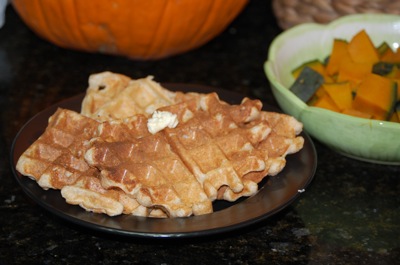 For dinner I had my two favorite foods: fluffy waffles* with butter and real maple syrup, and kabocha*. The recipe for the waffles is HERE. I made it fattier by using egg yolks instead of applesauce and kefir instead of milk. Bobby did his own thing and went for rice and chicken. I like breakfast for dinner. 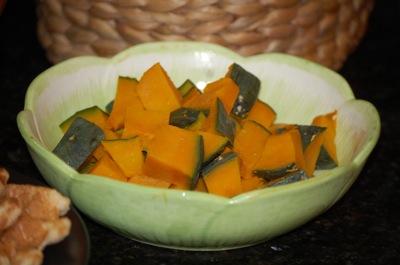 I just steamed the kabocha and stuck it in the freezer to cool. All together now. 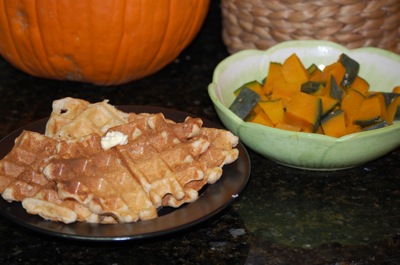 With these goodies, I had a bit of fluffy bread* that Bobby bought yesterday. There were several persimmons afterwards.* Did you know they are especially delicious with almond butter? Try it.

Did you have a lazy Sunday?

*Edited to add (on 6/14/2011): Holy crap what a carby dinner! No wonder at the time I was feeling a little mushy. This was from back in the days when I still wasn’t eating as much fat and protein as I should have been (though, had you asked me, I would have said I was eating plenty of fats). As you can see, I had carby munchies – the carbolicious dinner only enhanced my cravings for starchy, sugary things, which is why I followed up this large meal with more bread (starch) and more fruit (sugar).