Now Coco and Sophia are both here!

Tonight we drove up to San Francisco for the first Foodbuzz Festival event. The welcome reception was from 5-7pm at the Hotel Vitale. This wasn’t the main food event of the day, but they did have two cool appetizers: gruyere gougeres with bacon and mascarpone and pork rillettes. They were provided by midi. 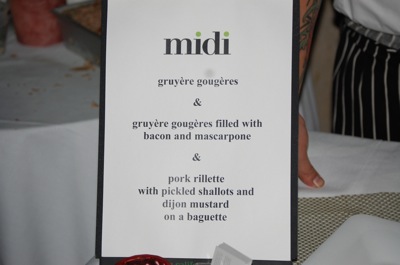 I tried the rilletes. Pretty good, but kind of salty. I didn’t try the puff things, but they looked cool. 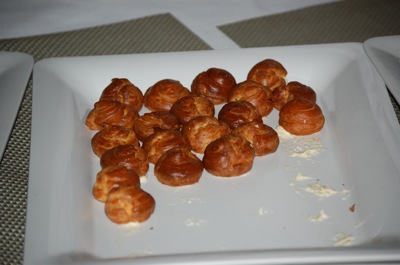 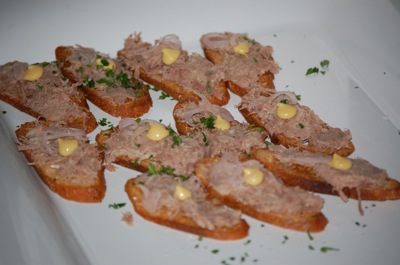 After the reception we headed over to the Ferry Building for an amazing dinner event. Foodbuzz rented out a portion of the building and had restaurants serving food all the way down the alley.

As soon as we entered I saw mini cupcakes, and I couldn’t resist. Dessert first! I tried the pumpkin cupcake, but they also had red velvet, chocolate cinnamon, and an almond flavored one. I had an almond one on my way out for my real dessert. These were provided by Mission Minis. 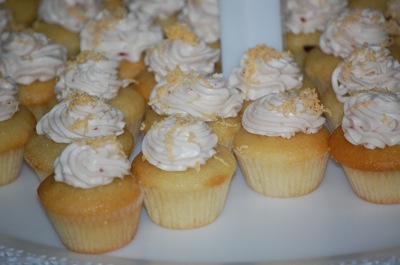 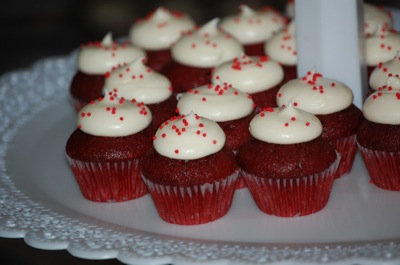 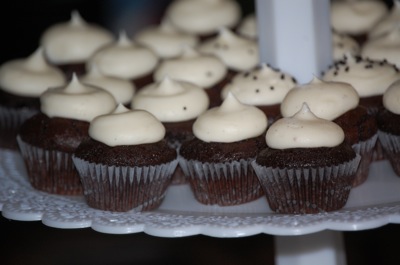 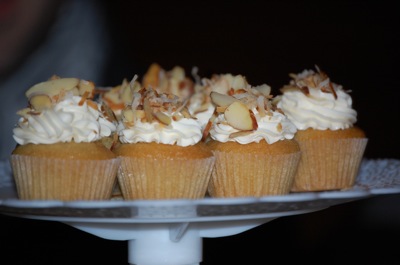 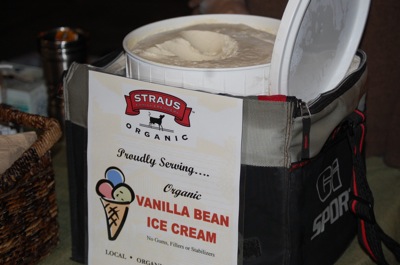 Then it was time for some real food. I had a bean burrito from Tacolicious. It wasn’t that good. I wanted chicken, but they were out. They had cool shirts though. 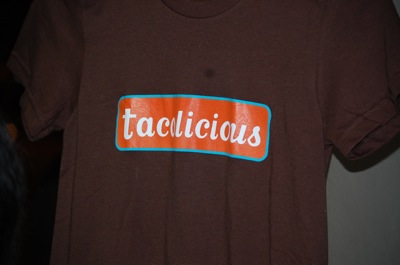 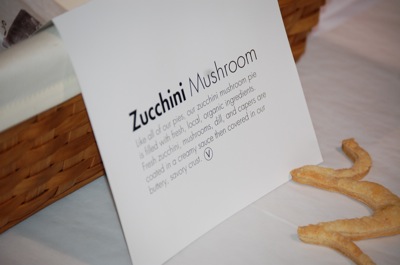 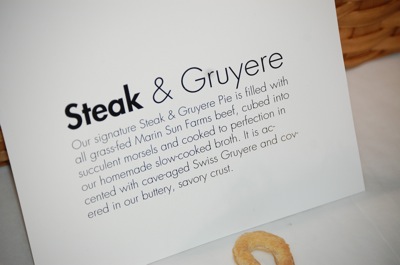 And a raw oyster from Hog Island Oyster Co…. awesome. 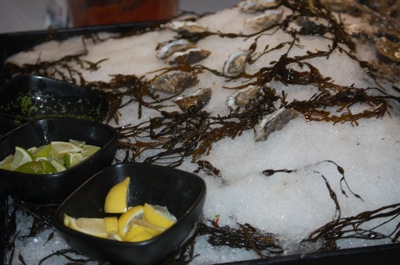 I passed on these chicharrones (fried pork chips) but they were cool looking. From 4505 Meats. 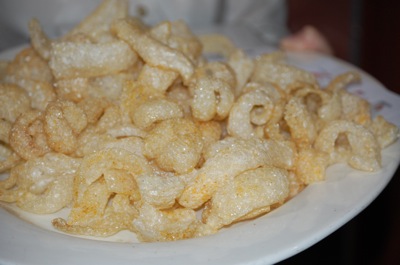 Alive had a selection of raw foods – 2 raw pizzas and raw cheesecake. These were okay. Not my favorite, to be honest. 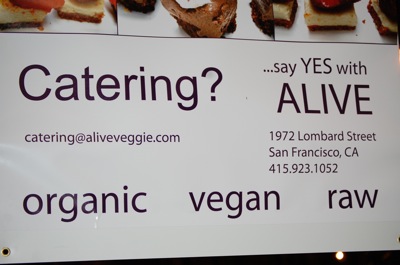 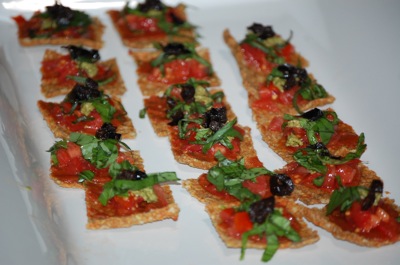 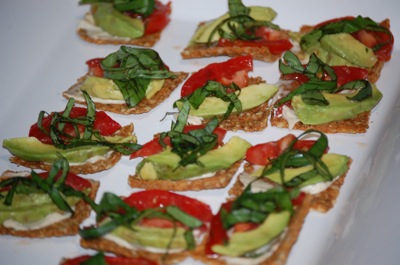 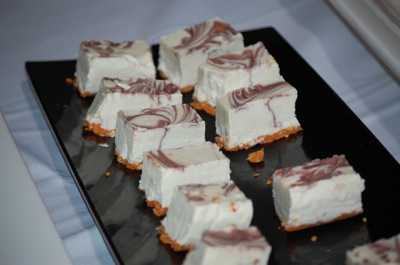 The best items of the night: Spencer on the Go‘s Beet Salad with blue cheese and "far west fungi vol au vent" (creamy mushrooms on top of a puff thing). I went back for seconds on both of these. 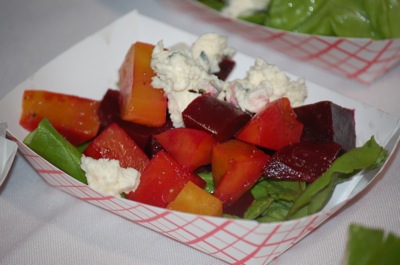 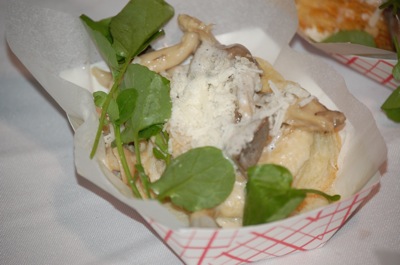 Then there was some incredible thin crust pizza from Pizza Politana. This was the best pizza I’ve had outside of Italy and New York. And I didn’t think I was a pizza person. 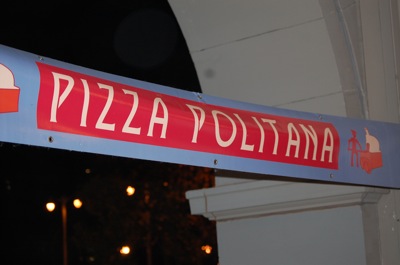 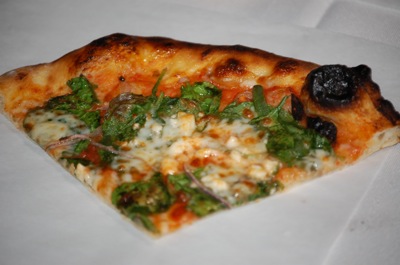 Lastly, there was a cool pork sandwich and potatoes from Roli Roti. This seemed to be really popular with other bloggers, but I thought it was just okay. 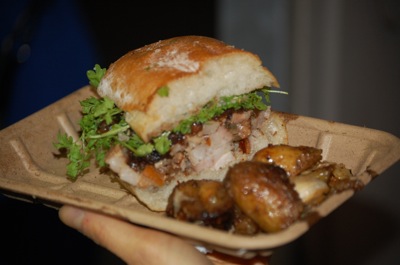 They had this funny shirt: "I heart Crispy Skin". (TWSS? Not.) 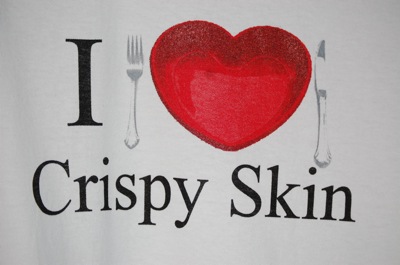 My favorite of the night was absolutely the mushroom dish from Spencer on the Go (second favorite was their beet salad). Holy amazing yum. On the way out I snagged some more ice cream and the almond cupcake.

Don’t worry, I didn’t finish everything pictured. I can’t wait to see what’s in store for tomorrow… Happy Saturday!