Let’s talk ramen. What is it? Basically – noodles and broth. It’s traditionally a Japanese dish, but it did originate in China. The broth is usually a meat or fish stock, and it will have soy or miso (or both) in it. Popular toppings – pork, shrimp, fish balls, fish cakes, scallions, cabbage, spinach, dried seaweed, fish flakes (forget what these are called), and even corn (yum). It’s kind of an art form in Japan; every town has their own special dish, and there is always competition for who can make the best ramen.

Back at Cornell I watched a movie called Tampopo about Japanese food. It’s a “noodle western” (a play on Speaghetti Western). Until I watched this movie I didn’t realize the cultural importance of ramen in Japan. It was a good film, so put it on your list!

A few weeks ago Bobby sent me this picture in the middle of the day: 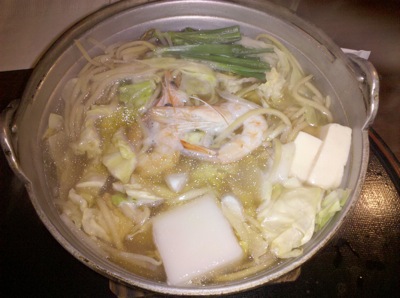 He had gone to Menchanko Tei, a ramen place in Manhattan. I think he went to the one on East 45th Street between Lex and 3rd Aves.

He got the signature “Menchanko“ bowl ($9) – their original noodle recipe, individually cooked in a cast iron bowl (see picture). It starts with traditional thick ramen noodles and a rich soy broth, then it’s topped with chicken, shrimp, fish balls, tofu, ricecakes, and vegetables.

He says: “Really good. They make their own noodles there. The broth was salty and savory (in a good way) and it was perfectly hot. Ramen is best hot. And this was awesome. I’m pretty sure they did not use MSG, but don’t quote me on that.” (Whoops!)

Wish I could have joined you, sweetie! I was hard at work, and I don’t remember what I had for lunch that day (it was December 1st, a Tuesday).

Luckily, we are getting ramen a week from tomorrow (Sunday the 20th) before Bobby heads down to Miami (I’m joining him a few days later for Christmas with his family). We’re going with our friends (we went to Josie’s West with them). I have never really been a ramen person, but I’m hoping that my tastes have changed. Bobby is always raving about ramen and I want to rave about it too.

Do you like ramen? Do you like noodles? I’m not much of a soup person, but this week I have been going crazy for these macrobiotic vegan noodle dishes. They’re awesome.

P.S. Happy Hanukkah to those of you who celebrate it! Enjoy 🙂