This week has been very very busy. I’m trying to get as much as I can out of this free Equinox pass (for the intenSati Warrior Challenge) and work is pretty crazy and I’m also trying to have a social life. Is that impossible? I wish I didn’t have to sleep.

I have eaten some very yummy things, though. These are steamed Japanese sweet potatoes: 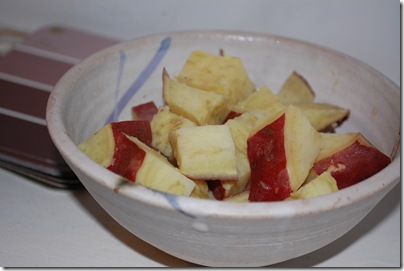 I just cut up a humongous ‘tater and steamed it for about 6-7 minutes. The chunks were small enough that it cooked quickly. Tasted kind of like a ripe kabocha, but not quite as good. I miss kabocha squash – I should definitely make an effort to get some. I think I had this sweet potato with some maple syrup. Those are paint chips in the background.

AM New York (a free paper that I get going in to the subway) has had coupons recently for $5 off at Energy Kitchen. Energy kitchen is a fast food store that only sells dishes that are under 500 calories! I love it. I got this total tuna sandwich the other day:

It has 290 calories. Obviously you can’t just have one dish from there, because it wouldn’t be much food – but if you get a sandwich and have something extra like an apple, it’s a really yummy, healthy, satisfying lunch. I wish I had pictures of the other things I’ve tried: the veggie egg wrap with broccoli and onions (274 calories), the ostrich (!) burger (271 calories), the steamed broccoli side (kind of boring), and the sauteed mushrooms and onions side (very good!). My coworker likes Energy Kitchen too – his new year’s resolutions had to do with being healthier and eating less meat, so we like similar stuff!

Last but not least is this great salad I had a few weeks ago when I was in NJ for new year’s: 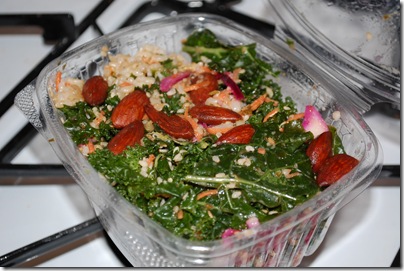 It’s called the Whole Earth Salad (named after the Whole Earth Center in Princeton, where my dad and sister got it). I wrote down what I think is in it so that I can try to recreate it: kale, almonds, rice/bulgar, cabbage, carrots, sesame seeds, marinated firm tofu, and a lemony dressing. It’s vegan (and vegetarian).

Off to snuggle. What are you doing this weekend?

19 Replies to “Healthy Eats for a Busy Life”