As you guys know, I participated in the intenSati Warrior Challenge this month. Sunday was the closing ceremony. It was a really inspiring last class, and I am so glad that I went. When I got there I hung out with Missy (we did the challenge together).

I am going to lay this out the same way Missy did.

Summary of the closing event:

It was scheduled for 2 hours (1 – 3pm on Sunday). The first 20 minutes or so we mingled around and then we sat down and people shared some of their experiences. I did not have any major life changes during the challenge, but I was still happy with it. Some people did though! I loved hearing about all the courageous acts that people attempted. IntenSati has a way of really helping to clean up your life.

Then we did the class. I think it lasted a little bit more than an hour. First Natalia taught her segment, then Lindsay jumped in, and then Patricia did the last part (slow lower body stuff). Patricia actually did the first 2 parts that Natalia and Lindsay taught and I think she realized how hard intenSati is! After the class was over she made a comment about how difficult the workout was. I was impressed.

Then came the slightly awkward part. We had to find a partner (I picked Missy, which is kind of a cop out). Then we had to do the lower body workout while facing the partner. This was fine. THEN we had to stare into each other’s eyes for a few minutes. It was hard! I never realized how difficult it can be to hold someone’s gaze. I started worrying about whether I looked goofy or Missy thought it was silly; it was actually a really eye-opening experience. I tend to doubt myself and be self-conscious, but I really shouldn’t do that. Afterwards we gave each other a hug and said how much we believed in each other. It was really nice.

Then we had another sharing session and they gave away prizes (I didn’t win anything). The girl who did the most classes did 29 classes in the 30 days. Crazy! She did multiple classes a day sometimes. After the sharing we heard from Laurie of the Handel Group, which was very cool. They seem like a great organization.

Overall, I LOVED my intenSati experience. I can’t wait to take the occasional intenSati class (I’m hoping once a week!). There is another Warrior Challenge coming up, so if you are in the New York area and want a free month of Equinox, GO FOR IT! Check out the intenSati website.

I think I am going to get some sleep. I did another class tonight and I’m very tired! I’ve had a really awesome week so far though and I want to keep it up.

What made you happy today? What made me happy was realizing I can choose to be happy any time I want.

Today was an interesting day. I woke up early-ish (for a weekend) and I had the urge to finish painting my bathroom… so I took my vitamins, had some chocolate, made some tea, and got to work.

One and a half hours later I stepped down off of the kitchen stool and surveyed my work. It looks good. I assembled a bathroom shelf thing that has been waiting to be put up (waiting for me to finish the painting) and actually managed to screw it into the wall. It is not the fanciest of shelves, but it’s clean and simple and it does what I need it to do.

At this point I was pretty hungry, so I woke Bobby up and we ordered big salads from downstairs (Metro Cafe). Our salads always end up being complete opposites – but both are (I think) delicious (Bobby does not like my salads – too kitchen-sink-y). Metro is having a deal this month – unlimited topping salads for $6 if you order online.

After an hour or so of doing nothing, I got bored. I got out of the house and went for a walk. It was terribly cold today, but the walk was just what I needed. I walked across Central Park South, up to 72nd Street, then back across The Park. I mapped it and it was about 3.2 miles.

Today happened to be the Winter Jam at The Park, which meant that there was music, a snowboarding show, and some free samples. I picked up a bag of apple slices and a lollipop (both given to Bobby) and I bought 4 Fuji apples ($1.50/pound) for myself. The apples are gone.

We ordered Hawaiian for dinner and I supplemented with a big bowl of oat bran and oatmeal mixed together. I cooked it in almond milk and it was so creamy. Topped with maple syrup and more almond milk. 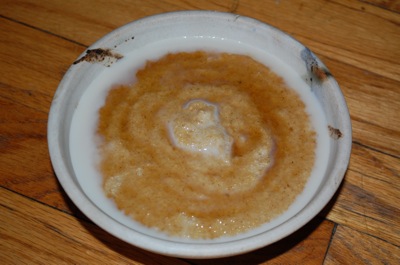 And I’ve been snacking on a bunch of fruit as well. And this kombucha tea (it was on sale for $2): 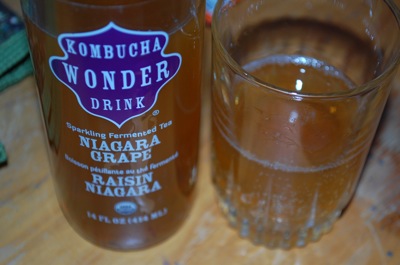 What are you working on? Any home renovations?

I had my first acupuncture treatment this morning. So far I am very impressed with Nicholas Steadman, but I’ll probably write a more thorough review after I’ve gotten it again (I signed up for another session on Thursday night). I think I am very lucky to have found this.

Here is some food! Bobby and I have been to this Japanese place called East 3 times now. We have definitely learned what to get. The menus have pictures for every dish: 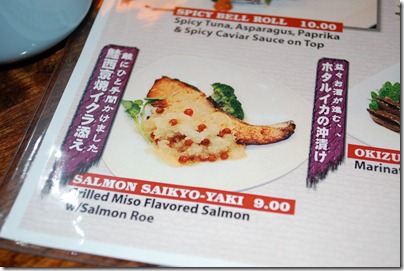 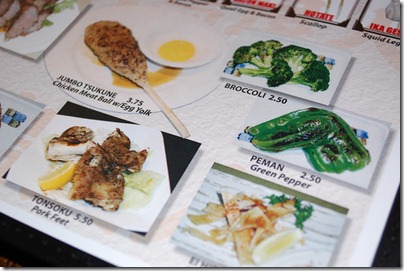 I like to get tea (complimentary) with my meals. 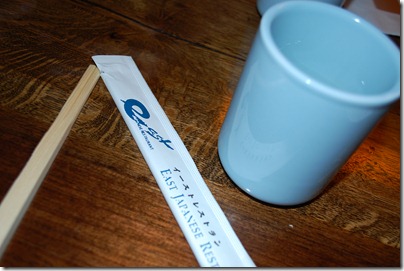 The first time we went I got this grilled broccoli. Kind of a ripoff ($2.50 I think), but very good. 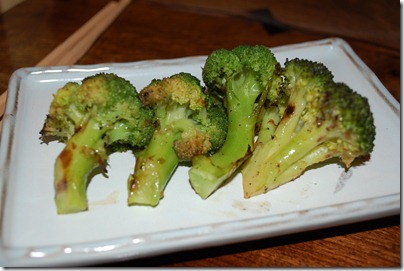 Bobby got this burdock noodle soup with tempura and fish cake things. He said it was delicious and finished it… I got to taste the broth though. Pretty yummy. 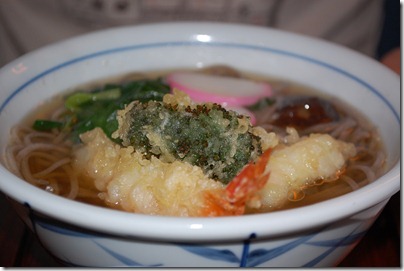 The first night he also got this salmon roll ($10?). I’m not that much of a sushi person, but I tried it and I thought it was alright. 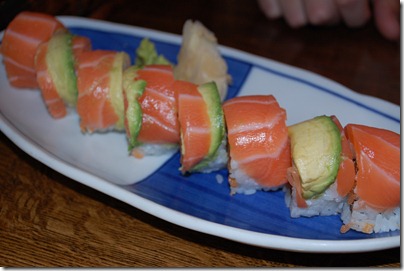 I had to get a salad, and this one rocked. It was only $6 and it was huge. 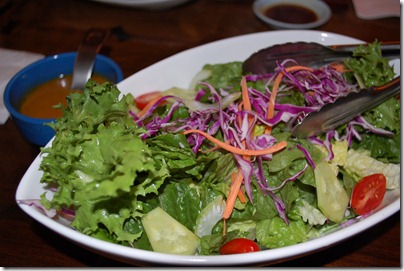 And I got this grilled salmon (miso glazed, $9) and horseradish with some sort of roe. I actually chopped most of this up and put it in the salad – so awesome. If this were cheaper I would get it again (it was a fairly small portion). 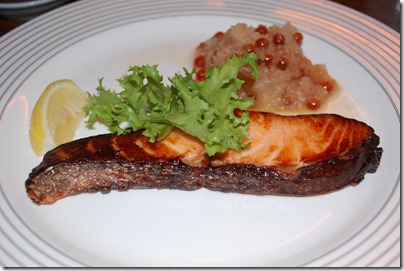 The next time we went with my mom (she had been up to help me paint). I got the salad again ($6). It is gigantic and probably the best deal I’ve seen in New York.

My mom got a bento box which came with a small salad and miso soup. 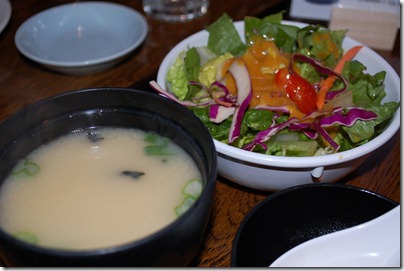 That night I got the chicken teriyaki ($5 something?). Ahh, this was delicious. It came with a piece of broccoli and a piece of carrot. 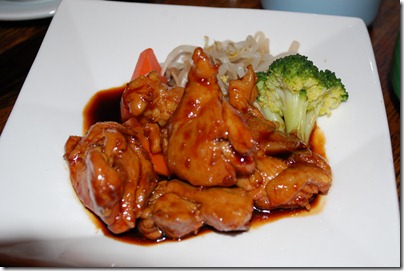 This was the rest of my mom’s bento box – seaweed salads, rice, salmon teriyaki, tempura, and a roll. I helped her 🙂 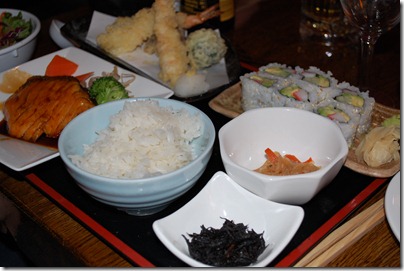 Bobby got a soup again that night. I don’t remember which one. Or maybe this was the burdock one and the other one was something else. Anyway, this was delicious as well. 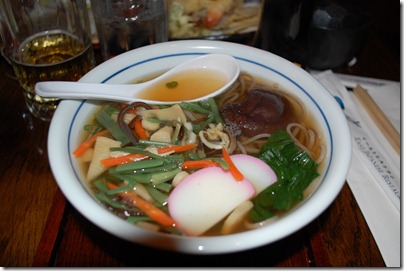 And that same salmon roll (I want to say it’s called salmon lover’s). 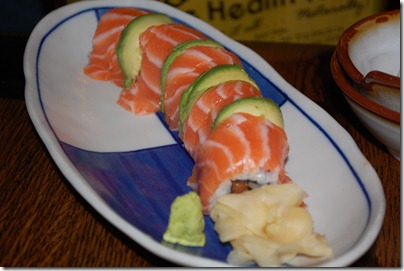 We went again last night for Salmon Thursday! Lots of salmon dishes were super-reduced, so Bobby and I went all out for salmon. Happy couple: 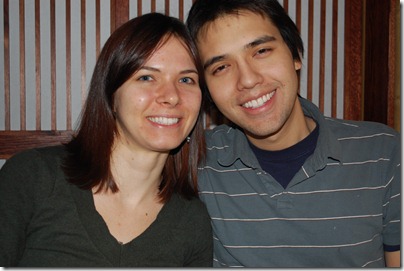 I got the salad yet again. Bobby got that salmon roll yet again. 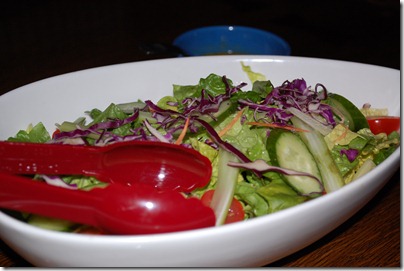 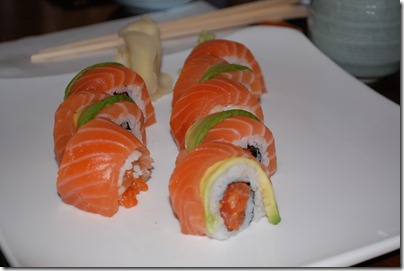 Then… I got something called “salmon neck” for just $4. This plate is twice the size of a normal dinner plate. So huge!! It wasn’t all meat though (bones, eyes – you know – the usual). 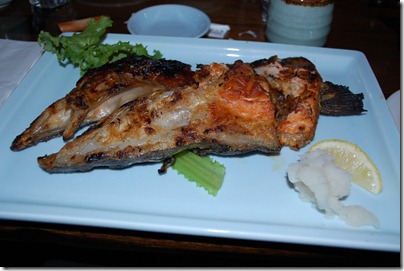 It came with some horseradish stuff. Bobby also got a natto roll (fermented soybeans – I do NOT like this). 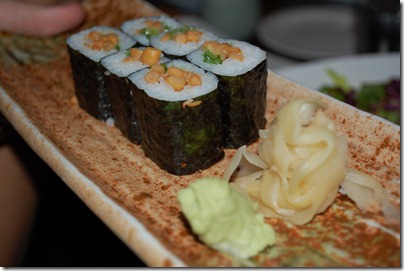 And another ridiculously cheap salmon roll (normally $14 or something, but on Salmon Thursday I think it’s $8). 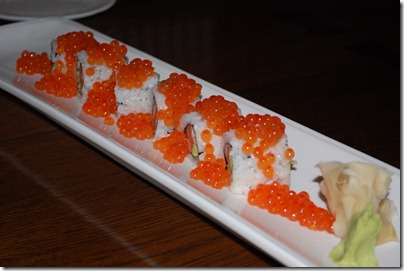 Wow, what a lot of delicious Japanese food. I would highly recommend East. They have a few other locations as well. Bobby was the mayor briefly at this one, but he was ousted just last night.

What are your weekend plans? I am going to IKEA!

I am not sure how the week flies by so quickly. It seems like yesterday that I was posting about the perfect cornbread casserole, but it turns out that that was on Sunday night (!), already three days ago.

Sunday night before I posted Bobby and I went out to a Vietnamese place with our friend down in Chinatown thanks to a blogger rec and it was delicious. That post will have to wait until I upload the pictures though.

In the meantime, I wanted to share some insights from a really interesting conversation I had last night. My friend gave me some really important advice about making or breaking habits. There is so much more that I want to say, but I will not go into it all at once. For now, here is what I have to say (and if none of this makes sense, I apologize – skip down to pictures of yummy food!).

Next time I want to talk about starters/initiators vs. maintainers. More to come!

Heather posted today about her standard dinners. Mine are actually quite similar! Here is one: 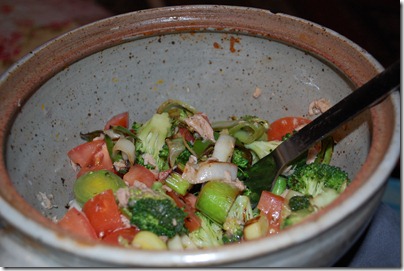 I usually have a nice base of veggies and I top it with fatty things that are healthy. This was (as far as I can recall)…

My favorite veggies that are almost in these big bowls are Brussels sprouts and broccoli. 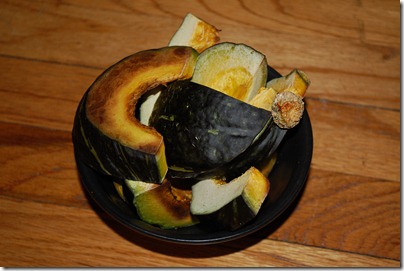 This is roasted kabocha (possibly from the same night). It was an unripe kabocha, but I have discovered that the best way to salvage these (they just aren’t as sweet) is to roast them in the oven at about 375F for 30-40 minutes. There is something wonderful about my current oven (maybe because it’s gas?) and the kabocha comes out deliciously starchy and good.

I am off to eat some oatmeal for dessert. I am catching up on last night’s Biggest Loser as well (I was on the phone and missed most of it).

What habit do you wish you could change?