I added a tab on the blog called “Operation Wedding“. I’ll be tracking my workouts and progress over the next 2.5 months… July 24th is quickly approaching! Operation Wedding is well underway – I am very sore this morning.

In other wedding news, I got a caterer. It’s going to be a secret though. You will just have to wait and see because I feel like being secretive. At least for now.

I wanted to share two yummy salads that I have made recently. I always eat more salads in the summer – I just crave them. And I have decided that $2.99 for a bunch of kale is not so terrible. It’s cheaper than eating out, I suppose. 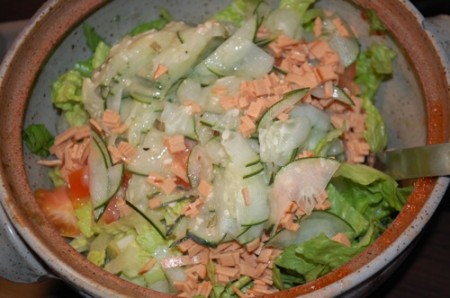 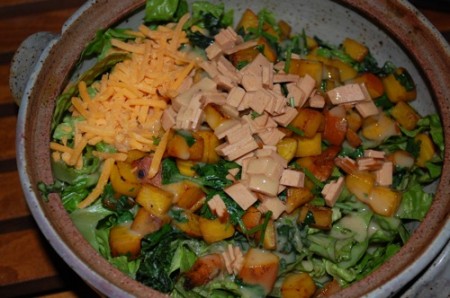 They were delicious. Reminds me of doing Leng’s salad challenges last year. I hear RhodeyGirl is doing a salad challenge right now too, and so is Lara. I adore salad, and I probably have a salad almost every day without even trying. Don’t forget, I am The Salad Girl.

In non-salad news, I had this amazing flatbread from Trader Joe’s this weekend: 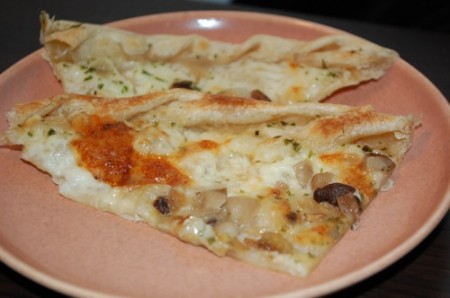 It was called the “Tarte aux Champignons” – a French style flat bread with mushrooms, emmental, and parmesan (love!) cheese. I ate half and Bobby ate half… but I stole his crust. It was amazing. I actually wish the whole thing was just crust. We’ll definitely be buying this again if we can ever get into Trader Joe’s. I had to get this when I was in New Jersey because the Union Square Trader Joe’s lines are always too long.

What’s your favorite salad dressing? Mine is certainly honey mustard! I get it 99% of the time.