We’re back in New York (from our Miami trip)! More on that later though. The other day Bobby and I ended up going Sacred Chow, a vegan restaurant downtown.

Sacred Chow is organic, fair trade, sustainable, kosher, and vegan. And relatively inexpensive for what it offers. I cannot wait to go back. It’s located near NYU on Sullivan Street (between West 3rd and Bleecker). It’s right near Quantum Leap, Peanut Butter & Co., and probably a bunch of other cool places.

I was a salad girl and got the Tapa Salad ($12), which is their standard humongous salad (seasonal greens, shredded beets, shredded carrots, cucumbers) and a choice of any tapas dish. I got the honey mustard dressing, but it was just okay. I didn’t use much and instead used the dip that came with my side dish. 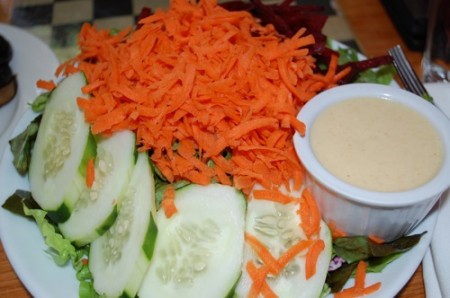 For my tapas side I chose the sauteed shiitake mushrooms, which were tender, juicy, and meaty. They came with a wonderful gluten-free South Indian Dip. I used all of it (for dipping and for my salad). So good. 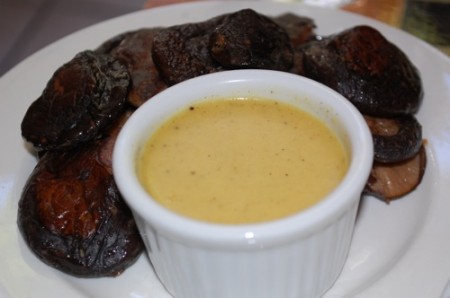 Bobby got the Breakfast Sandwich ($12.75), which is a soy biscuit filled with tofu scramble (which spills out – there is so much) and tempeh bacon (actually yummy, even though I normally hate tempeh). It came with the largest side salad I have ever seen. The salad was a smaller version of mine. 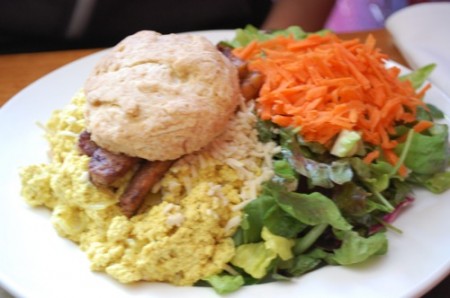 Sure enough, after finishing (!) this, Bobby says, “Wow, I’m full.” Yes sweetie, that is what happens when you eat a salad. They honestly are filling. And not in that unpleasant too-many-carbs-filling way; salads fill you up in a comforting veggie-full way.

The scramble was the best scramble either of us had ever had, so we will definitely be going back. We also couldn’t get enough of my mushrooms. Next time I think we’ll get a few tapas (grilled western tofu, bbq seitan, root vegetable latkes, marinated raw kale) or maybe go for some of the other brunch selections (biscuits and gravy, omega-3 waffle).

Unfortunately we are currently laid up with the flu, so we are missing my coworker’s wedding. I’m getting better, but Bobby is now hitting the worst of it and is probably contagious. I’m sure it’ll be a beautiful wedding and they are so sweet. They’re honeymooning in Hawaii (just like us).