Today’s guest post on ethnic food ties into my new theme. Anne blogs over at Food Loving Polar Bear. She likes yoga and walking just as much as I do and she’s going to share some of her favorite foods from Finland (that’s where she lives!). A quick side note…

How does ethnic food tie into intuitive eating?

Ethnic food is usually not particularly low-calorie or in line with clean-eating principles. But it’s usually delicious; if you can eat a diet filled with wonderful ethnic foods and not gain weight (or maintain a healthy weight) you are probably eating intuitively. Here’s an example – the traditional European diet (French, Finnish, etc…) is filled with things like heavy cream, cheese, and decadent desserts and pastries like croissants (oh, croissants!). Yet Europeans are generally much thinner than Americans. Why?

Why French Women Don’t Get Fat

French women don’t obsess about food, they eat what they crave, and they eat real food. They’re in tune with the body’s hunger and fullness signals. They don’t eat emotionally (meaning they’re not the type to turn to Mr. Ben or Mr. Jerry when they’re sad) and they’re not emotional about eating. These are generalizations of course, but these are the general principles of intuitive eating.

Enough of my rambling. Without further ado… the lovely Anne!

I’m a new blogger from Finland and I am proud to introduce you some flavors from my home country. Thanks Maggie for the chance to promote my tiny country and its delicious foods! 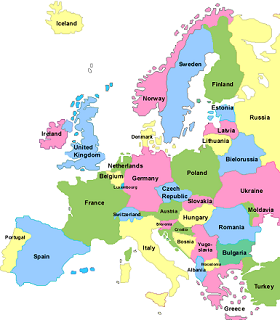 A little background information about Finland:

Now you know a bit about my home country! In this post I’m going to concentrate on my favorite topic: FOOD.

Traditional Finnish cuisine is similar to Swedish, German and Russian cuisines. Finnish dishes tend to be less sweet than Swedish ones, and Finns use little or no sour cream in preparation compared to their Russian neighbors.

Traditional dishes (perinneruoka) are rarely eaten on a daily basis and saved for the real holidays, such as Christmas and Easter. The traditional dishes are often regional and more valued by the older generations or only eaten during a specific holiday; for example Mämmi during Easter. This following dish is only eaten during Easter, (almost) never on other occasions. For the recipe of Mämmi click here. 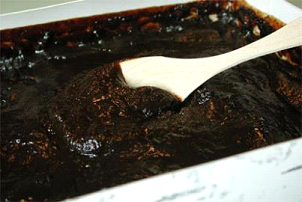 Mämmi does not look very appealing 😀

Home-made food (kotiruoka) can be also found in restaurants and we have many restaurants in Helsinki specializing in traditional Finnish food.

The most common traditional foods in Finland (which are eaten on daily basis in Finnish homes): 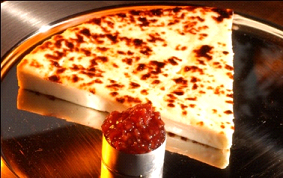 It’s usually eaten with jam, but I usually eat without. It doesn’t have much flavor and it feels a bit rubbery in your mouth but once you get used to it, you will love it! 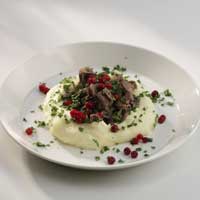 Reindeer is usually eaten with mashed potatoes, jam and pickles. It’s one of the most popular dishes among those foreigners whom I have introduced this dish to. 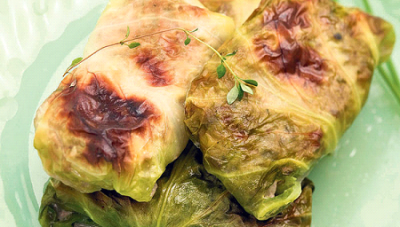 They look like spring rolls, but are not. It’s minced meat (ground beef) rolled into a cabbage leaf. They’re also served with jam, usually with cranberry. These took me almost 20 years to like them, but now I actually like eating the rolls, I also should try making them at home. As a child this used to be my most-hated-dish-ever 😀

Pea soup is one of the most popular dishes among poor students. It’s cheap, filling and even though you have tons of gas in your stomach after eating a can, sometimes you just don’t mind. Pea soup is usually eaten here every Thursday. Even my office has pea soup Thursdays! It’s eaten with mustard or, like in the picture, with ham 😉 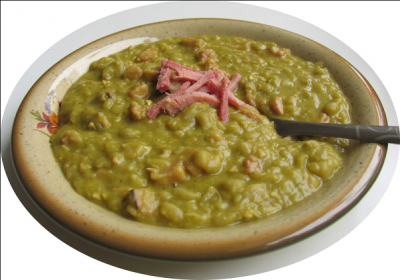 These are a familiar dish in my kitchen. My boyfriend loves my home made meatballs and I have also made them in Germany for a bunch of Germans who had no idea how to make them at home, they were a success! 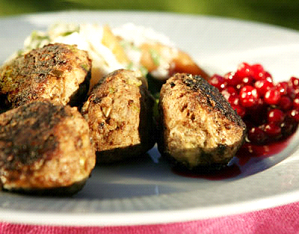 They are also usually eaten with mashed potatoes. 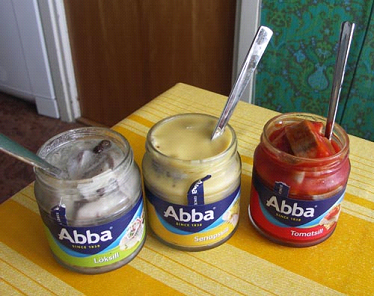 There are tons of different kinds of pickled herrings in Finnish grocery stores. I personally love the middle one, herring with mustard. They are a traditional summer dish and are eaten with new (small) potatoes and dill.

This is a product I tried to explain in my blog some time ago. It was difficult! I found an article in Foodista about viili! 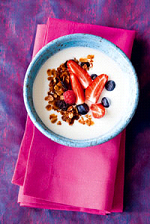 We Finns love fish, especially smoked fish! We have so many different kinds of fish and I really want to make you drool in the end of my guest post, so here are some pictures of my favorite delicacy 😉 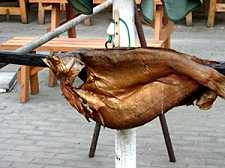 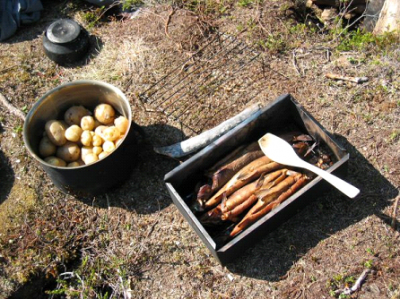 I hope you all enjoyed this little journey to Finnish cuisine. Feel free to ask me more anytime!

Thanks again, Anne! Finnish food sounds awesome. I have actually had a lot of these dishes because I’m part German (Cabbage Rolls, Pickled Herring, Meatballs, Pea Soup). I’ve never had reindeer but it sounds really cool. And anything that is translated as “bread-cheese” is okay in my book.

What’s your favorite ethnic food? What do you think about ethnic food and intuitive eating?

P.S. I have been playing around and updating my blog; poke about and check out my new tabs and some updated pages if you want. I’m not quite done yet so I’ll do another announcement when I finish.

I have some favorites to share for the week…

In case you are a new reader, or have been confused about all the guest posts you’ve been seeing recently, here is a recap of recent events:

I had 3 posts this week on intuitive eating:

And if you missed them the first time around, here are all of my fabulous guest posts from some of my favorite bloggers (in order of posting):

Thanks again, girls. I do have a few more guest posts on the way (I had too many to post while I was gone) so expect about one per week for a little while.

I am an optimizer (I come from a long line of optimizers). I like to optimize pleasurable things in life, like meals. Like this dinner (fish tacos from Hula Grill in Kaanapali): 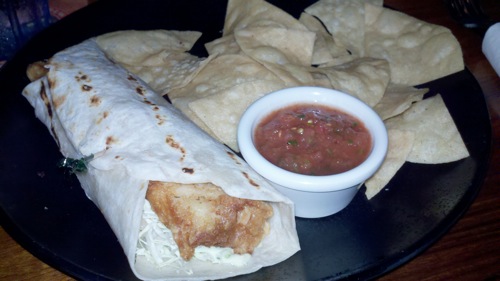 Now – I’m not going all Brave New World on you. I don’t think that we should amuse ourselves to death. But I do think that there’s merit in doing what you love, even if it has no real purpose. If you do what you love, you won’t be stressed out, and you’ll probably be happier and live longer. If I’m going to tie this back to food, I would say that if you’re happy (and distracted by the things that make you happy) you are probably not mindlessly snacking or incessantly worrying about your diet.

So what about passions?

“You never achieve success unless you like what you are doing.” –Dale Carnegie

If you know what your passion(s) is (are), great. You are way ahead of the rest of us. If you don’t, I think you can figure it out by starting with the basics – enjoying yourself to figure out what makes you happy.

After a while you can use those little things to discover something (something bigger maybe) that you are passionate about and that you can do for a living, or do on the side – something that gets you up in the morning and makes you eager to see what happens next.

Finding What You Really Love – My Story

On our honeymoon we took long walks, we read, we cooked, we ate good food, we drank (a little), and we just hung out. Those things all make me really happy. Maybe those activities aren’t really “passions” in the traditional sense, but they all maximized my happiness. I don’t usually take time in real life (as opposed to honeymoon life) to do those things because I don’t feel like they have a real purpose – but they do have a purpose: to make me happy! 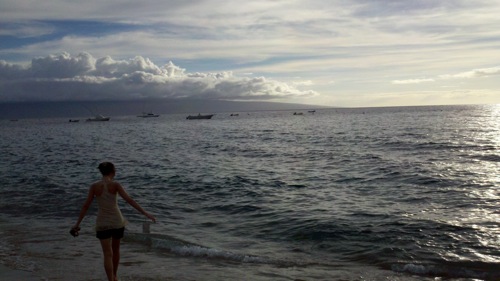 Now that I’m back, I’ve realized a few things:

So now I’m doing all these things that I enjoy and it’s helping me figure out what I’m passionate about and what I want to do next.

Start with the little things. What do you enjoy? Here are some ideas:

Find the little things that make you happy; maybe one of them you’re passionate about. Then do everything you can with that passion.

“Chase down your passion like it’s the last bus of the night.”  –Terri Guillemets

Here is one last quote that I found while searching for quotes on passion (I just thought it was funny, and at least a little bit true):

“The most beautiful make-up of a woman is passion. But cosmetics are easier to buy.” — Yves Saint Laurent

Do you know what you’re passionate about?

I am never really sure what I want this blog to be about. You could say I’m a flip-flopper… 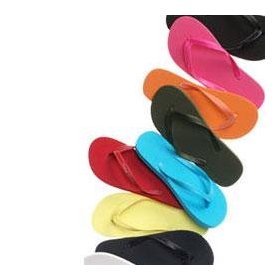 So: it’s time to stop flipping and flopping (or at least flip and flop decisively), because I think I know what my blog is all about. It’s about how I learned (and am still learning) to eat intuitively, and how those principles spill over into the rest of my life (for example, yoga and intuitive eating go hand in hand – just wait for a post on that).

Speaking of Knowing When to Stop… How do you know when to stop eating? Is it really as simple as knowing when you are full? My guess is NO.

Some people “save” lots of calories during the day so that they can have a big dinner or snack a lot after dinner. This can be unpleasant though (stomachache, indigestion, etc…), and can lead to a vicious cycle of a poor night’s sleep, feeling sick the next day, and repeating it all over again.

How can you end the cycle? Here are some tactics…

Dessert for Dinner, or: Eat What You Love and Be Satisfied 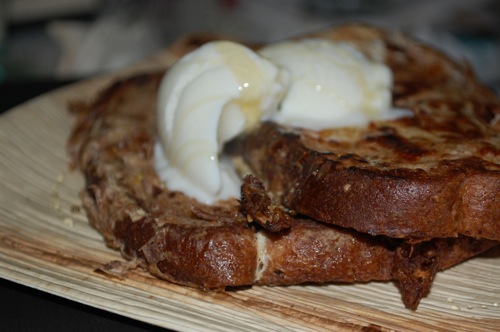 Last night I was on my own for dinner. My husband (I can’t stop saying that!) was at a work event until late so I was alone for the evening. Normally this might be a tricky situation – when I’m alone I’m more likely to snack out of boredom. 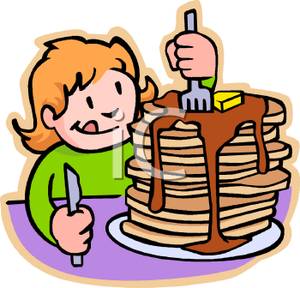 Trick one: know yourself. I’m a girl who can’t go without dessert. Ever. I cannot remember that last time I didn’t have dessert. I also know that once I have dessert it can turn into a snackfest. My belly and my head are not satisfied with a piece of fruit for dinner. Maybe your weakness is potato chips, or cereal. Whatever it is, make a note of it. Then…

Trick two: trick yourself. I may like dessert, but I am not okay with having Rocky Road for dinner. So what is a good substitute? Breakfast foods are usually desserty enough for me. French Toast in particular is comforting, delicious, and sweet enough to satisfy my dessert tooth. If you love your potato chips, portion out a serving (1 serving) to have with your dinner. If you don’t want it with a meal, you probably shouldn’t have it while watching TV anyway.

Trick three: indulge (just a little). I put tart frozen yogurt (from Trader Joe’s) on top of my dessert for dinner French Toast. If I didn’t do that I would probably want to eat frozen yogurt after dinner anyway. Again with the potato chips – why not get some really delicious potato chips (I like Terra Chips) so that you really enjoy your treat. 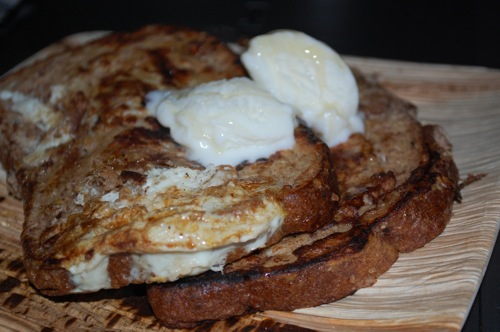 My Easy Peasy (Healthy) French Toast For One Recipe. Check it out if you want a low calorie but filling and healthy meal. I think it has about 300 calories total depending on your bread and toppings.

Have you ever had dessert for dinner? What foods are really satisfying for you?