This week’s “What’s Up Saturday” edition coming to you on Sunday.  Yesterday was a day for remembering, so the blog stayed silent. I was also away from the computer all day (!). I was helping out at meeting’s annual fall flea market and eating my mom’s amazing food. Driving back into the city late last night we saw this: 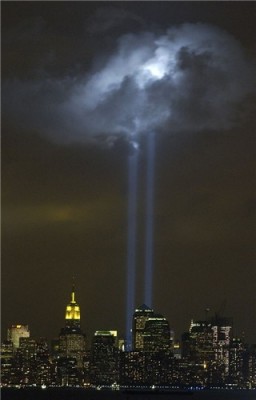 I do like that memorial. It is strange to be living in this city; 9 years ago I was in New Jersey in my third period math class (I was a sophomore in high school) when everything started. But on a happier note…

For some reason I don’t have as many starred articles this week. (I star my articles in Google Reader to save them for this post.)

Enjoy, and as usual, let me know your favorites from the week. If you haven’t entered already, you have until Wednesday to enter the stevia giveaway. There will be 4 winners and there are 3 ways to enter so get all your entries in!

Also, if you want to update me about your yoga routines, please do so on the 30 Days of Yoga page. I am keeping up with it! (So is Gaby.) You do not have to do yoga every day to update! It’s a whenever-you-want kind of thing.

Have a lovely peaceful Sunday 🙂

I have an awesome guest for you today: Eden! She is sarcastic and funny and I laugh every time I read her blog. She’s writing about one of my (many) passions – yoga. I haven’t been in a yoga mood lately, but with these tips I’m sure I’ll get back in the swing of things. Enjoy 🙂

My name is Eden (pronounced “Eh-den”, not Eeee-den”). I’m a yoga instructor and a chef living in Los Angeles. I love that Maggie has embraced yoga so much, but I know a lot of people don’t know how to get on the bandwagon. So I thought I’d share my secrets to become an ultimate yoga superstar! Here are my easy steps: (Note: if you aren’t familiar with my blog, sarcasm and cynicism are my BFF’s so don’t take my advice too literally; I’m not responsible for any head, neck, or genital area injuries!)

Step 1 – Start by seeking out trendy yoga studios in gentrified areas in either LA or NYC (sorry, but you’ll need to move if you are anywhere else. It’s just not going to happen in Iowa or Kansas). This is where all the rich and beautiful yogis are who will become your yoga allies. They are the yogis you must befriend and socialize with as you start your ascent to yoga stardom. Of these, you’ll need to figure out who the power yogis are (look for the ones wearing high-end yoga clothes and sporting a black Manduka yoga mat) and who are new to the game (they are the ones wearing K-Mart crap and practice on pastel colored mats). It is also very important that you figure out who the yoga nut-jobs are (i.e. they’re the ones spouting crackpot yoga theories and think yoga is all spiritual and everything). Unfortunately there are vast amounts of them in the yoga world. Befriend the former, unless one of the latter can get you introduced to one of the former. Remember that the yoga whack-jobs will always lead you astray in your rise to yoga fame.

Step 2 – You will now need to actually learn something about yoga. Have no fear though, as all yoga studios will have books and magazines that you can spy while waiting for a class to begin. No need to invest money for this (in fact, your first few classes at most yoga studios will usually be free or nominal in their quest to ‘hook’ you on yoga). Concentrate on books and articles about Iyengar and Ashtanga yoga in particular. The reason for this will become clear in step 3!

Step 3 – With a bit of yoga knowledge under your belt it is now time to chat up the other yogis around you. Always mention Iyengar or Ashtanga in your conversations with them. Don’t ask me why, just do it! Use a tired tone when doing this to suggest you know all about these styles and have practiced them for much longer than you care to remember. Almost all yogis you encounter can relate to one of these as they are the bases of all the other styles out there. Look for their knowing nods of acceptance.

Important Note: Don’t try and add your own opinion of which style is better at this stage; you’ll only confuse things. The important thing to remember for now is that you are trying to win friends, not influence people.

Step 4 – What if you get bored? I hear this often from virgin yogis, but you know what’s even more boring? Pretending you’re skiing on some machine for an hour at a gym filled with meat-heads and botoxed women with the words “juicy” plastered on their sweats. Yoga classes can be boring, but it’s not the yoga – it’s usually the teacher. They give poor instructions and can be dull and unstimulating. Some people think sex is boring, but they are usually with the wrong partner!

Step 5 – You are now in low yoga star orbit and need to cultivate one additional trait to solidify your yoga image to those around you. Your goal now is to learn to act ‘yogic’ (that dreamy far away look that will give you an air of authenticity as it will show that you have transcended your ties to ordinary daily living). Ideally, you will act this way around yoga students, yoga magazine publishers, and sport clothing manufacturers who you will be vying to get endorsements from (you are trying to get endorsements at this point, aren’t you?). Eat vegan publicly (because devout yogis believe in “Ahimsa”, meaning no harm to humans as well as animals, and I’m guessing especially cows too). Gorge on all the steak and processed twinkies in secret. Be assured that after a while you’ll become so yogic that you’ll forget where or who you are most of the time.

Step 6 – Create your own special “thing”. Be assured that there is always a new yoga style to be invented. As much as yoga people like to think they are practicing ancient yoga methods tied to past yoga gurus, a cult of yoga newness flourishes among them (they are all suckers for the latest yoga trend). Be inventive. Hey, if Jillian Michaels (who I call a drill Sargent with a vagina) can have a yoga dvd and make it trendy, anyone can. (But the last thing we need is Jillian yelling out instructions for “happy baby”.)

Step 7 – That’s it! You did it!! Good work!!! You are a yoga star. You can now om comfortably in your Malibu beach home or Park Avenue apartment. Forget about you pilgrimage to India. Any true yogi knows only 1% of the population does yoga there; your better bet is to move to Santa Monica, CA: the certified yoga Mecca.

Hope that helped you! Now get on your mat already, and get down, dawg!

I am so ready to be a yoga superstar. Anyone care to join me?

I’m kicking off 30 days of yoga – 20 minutes of yoga, every day. I started last night. Update me if you want to do it too! You can post your yogic activities on the 30 Days of Yoga Page. (You definitely don’t have to do yoga every single day, but it would be awesome if you left comments on that page with whatever yoga you did that day when you do do yoga– maybe it’ll be a great way to get lots of new recommendations!) We can chat about what we’ve learned with the 30 days as well. Now go join me! (Eden’s on the bandwagon already – she’s going to write a yoga routine for y’all to do.)

Also, I finally made my email more blog-friendly: maggie@thesaladgirl.com. Email me for fun 😀