Don’t forget to enter the Pecan Pumpkin Butter Giveaway!  You have until Wednesday (12/17/08) at 9pm PST to leave a comment.

Yesterday we went to two holiday parties – Bobby’s (for Microsoft) and mine!  We went to mine first (they started at the same time), but things hadn’t picked up 1.5 hours into the party, so we decided to head over to Bobby’s.  We were planning on going back to mine after Bobby’s was over, but we didn’t really have the energy when the time came.  Here’s my outfit: 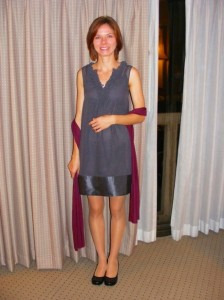 Bobby’s company rented out this huge building and had a themed event with lots of awesome multicultural food.  At this point I’d just been snacking on veggies and guac (at mine) so we decided to eat.  I got lots of veggie curry (mushrooms, potatoes, carrots, chickpeas) and this tropical fruit salad (pineapple, avocado (!), melons, mango, and some light creamy sauce).  I went back for lots of plates.

I wasn’t really planning on having desserts because they were all really sugary, but that plan went out the window after I had my first bite of chocolate cherry brownie.  I think I must have consumed at least a day’s worth of calories in desserts, but… it was worth it.  I usually eat so well that I think it’s okay to splurge once in a while.  I did wake up feeling sick and sweaty in the middle of the night, so I don’t think I’m going to overdose on sugar again in the near future.  Or at least I hope I don’t.

Backing up a bit…

Bobby and I headed into the city (San Francisco) in the early afternoon and ate lunch at our favorite Japanese deli – Delica RF-1 in the Ferry Building.  We got very similar meals.  I got: 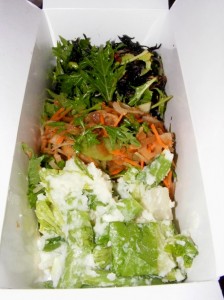 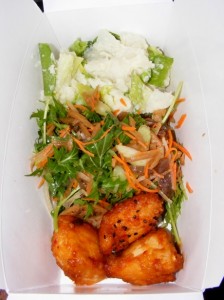 Later on Bobby got a bread bowl of tomato soup (vegetarian) and I had some of that as well.  We got the bowl on the side so we could dip it instead.  I also got this great diet black cherry soda (sweetened with Splenda; this is the first diet soda for me in almost 3 weeks!). 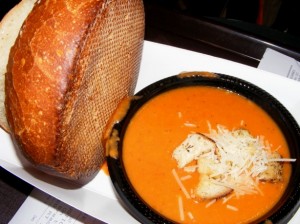 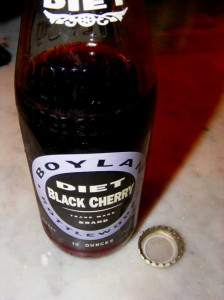 This morning I woke up feeling better after the massive desserts and headed down to the gym for an hour of walking on the treadmill.  It was nice.  I actually enjoy walking on a treadmill (but can’t stand running on one – too boring) and I watched this documentary about a con artist who called himself Christopher Rockefeller.  He’s French.  I think con artists are usually brilliant, even though they are insane.

Before heading back to Mountain View (by train) we picked up breakfast.  I got the perfect oatmeal from Starbucks.  It was good!  I added a bunch of spices (nutmeg, chocolate, and vanilla) and enjoyed it a lot.  I didn’t add the brown sugar that’s pictured.  I also added some tea (Berryblossom White, my favorite flavour at Starbucks) to the oatmeal to make it creamier because I forgot to add milk while I was still in the shop! 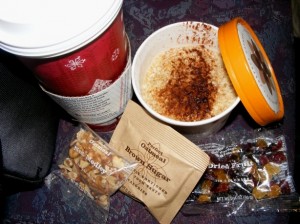 Once back in Mountain View, we stopped at the farmers’ market (it’s held in the train station parking lot) and I got some loose green grapes for $1/pound.  I took them home and made lunch – raspberry lowfat yogurt (a little more than a cup), a cup of grapes, and a thick HEEL slice (the best) of cinnamon sugar toast!  I saw this on Hil’s blog the other day and I’ve been craving it ever since. 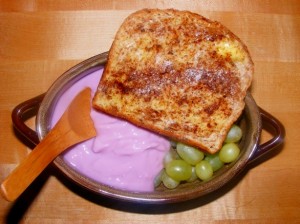 I’m hoping to do some yoga and maybe some more walking later today.  And tonight we have plans to get Vietnamese food.  I’m excited!  Oh, and there were apples today and yesterday, but you guys can just assume that I’m always having apples because I eat them so often that I forget to take pics or even mention them 🙂  Have a lovely Sunday!