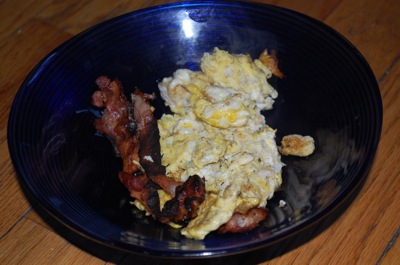 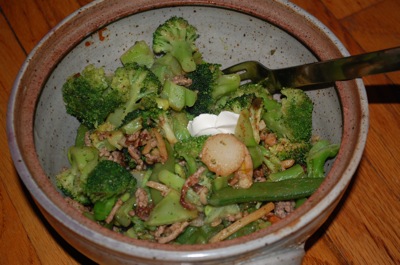 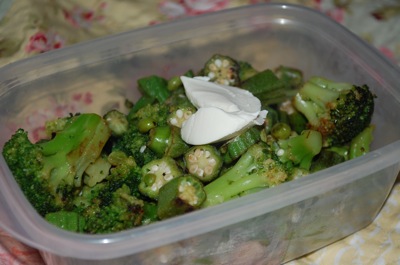 I mentioned yesterday that my very cool boss bought us lunch, but I neglected to tell you what we ordered! We ended up ordering delivery from Spice over on 8th Avenue. Spice is a very yummy Thai restaurant. I have been to the location at Union Square and I really liked it.

I ordered the Hawaiian Ginger and Pineapple Stir-fry (with onions, carrots, and mushrooms) and I ordered it with beef. Would I have preferred this to be organic beef? Of course. Did that fact that it wasn’t (I assume) stop me? Absolutely not. It was yummy and exactly what I was craving. 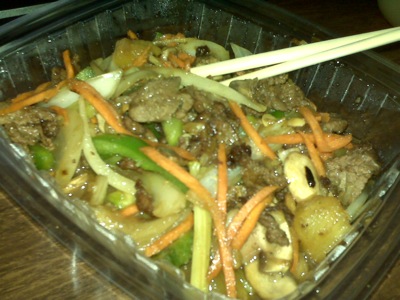 I also ordered the spring rolls (fried). I had one of them and gave the other to Bobby. They came with a very good sweet sauce. I have no idea what was in it. 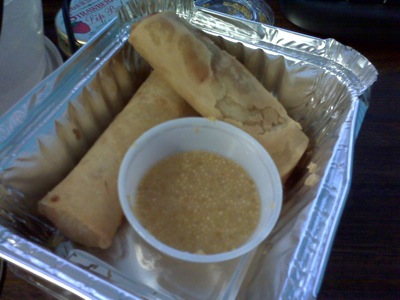 Last night I used the leftover beef to make a stirfry with some veggies. 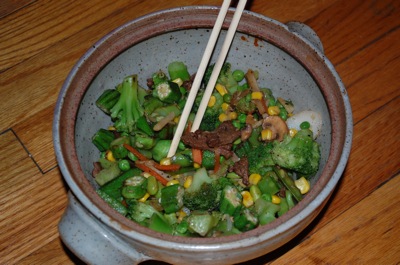 I have been using frozen veggies because they make cooking prep so so so much faster. I don’t have that much time to cook, and time will deter me from cooking (I’ve been doing takeout a lot). I cooked these in some butter and spices. Yum!

Are there any tricks you do to make cooking easier? Chopping veggies in advance? Making big batches and eating leftovers?

P.S. I had another acupuncture appointment today and I will definitely update about that soon. I need to sleep now!

It’s good to be blogging again!

On Thursday night Bobby and I met up with one of my friends from a long long time ago. Gosh, I missed her. We met her very smart and cool boyfriend as well. Thursday (December 3rd) was actually Bobby’s and my 4 year anniversary as well as my brother’s birthday and Bobby’s sister’s birthday. Pretty awesome day.

Anyway, Kate and Simon suggested that we check out Josie’s West on 75th and Amsterdam. It’s a restaurant that serves food and uses “healthy & wholesome ingredients”. Their menu had a glossary (maybe people kept asking questions?) that described some of the more atypical ingredients like “Air baked organic Belgian fries” and “coulis”.

Disclaimer: I didn’t take pictures; I found what I could online.

The meal started with complimentary bread. I chose the cornbread. It was just okay; Whole Foods’s cornbread is better. There was also a dish of some kind of creamed squash spread, which was completely fabulous. I put it on everything.

Bobby and I got two things and kind of shared. We got “organic mesclun greens” with grilled chicken and a red wine-wasabi vinaigrette. The vinaigrette was nothing short of incredible, but the greens and the chicken were fairly boring. I wouldn’t get this again (so bland) but I do want to try to recreate the vinaigrette.

We also got the “char-grilled natural turkey cheeseburger” (picture from the website) which came with cheddar and a honey mustard sauce. Bobby got steamed greens instead of fries (who is this boy?). The burger was very flavorful and juicy. I’d get it again for sure.

To be honest, the company was way more interesting than the food. We might go back, because I feel like I missed out on some cool dishes by getting the salad… but we weren’t really focused on the food at all and I had to pick something to order at the last minute so I went with my fallback (yep, I’m a salad girl). I was way more interested in catching up with Kate!

Overall rating: 6/10 stars. If it had been cheaper I would have rated it higher. The salad was about $15 and the burger was about $14. ::Shrug:: It was a great night, though.

Before dinner I hit up Lululemon and made a kickass buy; more on that later. I also have to blog about…

What are you doing this weekend? Tonight Bobby and I went to a neat joint in Astoria and tomorrow we’re going to Chinatown for lunch with 2 of my coworkers. We’re also going back to Lulu and I hope to do some grocery shopping so that I can actually cook something yummy.

I haven’t really been able to cook since I moved to New York. The only things that my kitchen has been used for are grits/oatmeal and grilled sandwiches (thanks, George!).

Last night Bobby and I got take out Chinese from Mee’s Noodles. He had actually gone there for lunch yesterday, and had some leftover beef lo mein. We also got chicken and broccoli over rice and “mee fun” noodles with chicken. The “mee fun” noodles were actually just rice noodles (vermicelli). 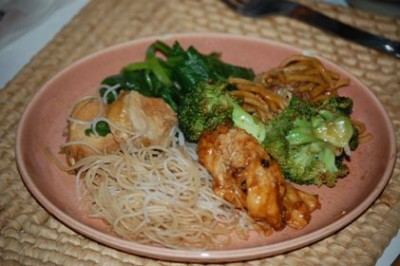 The beef lo mein – awesome. I love lo mein. The chicken and broccoli over rice – pretty good. I wish there had been a little more sauce. The “mee fun” – not that good. But that is only because I don’t like this kind of rice noodle. The chicken (marinated in soy sauce) was really tender though.

This place was (relatively) healthy compared to a lot of Chinese places that I’ve been to. There wasn’t much oil; I’d even call the “mee fun” dish a “diet” dish because it was steamed chicken and very little sauce over plain noodles… it even came with steamed spinach (which was not very good). I didn’t like the mee fun because it was boring.

Mee’s Noodles is on 2nd Ave and 49th Street and they have free delivery (not sure how far they’ll go). Definitely check it out if you’re in the area – it’s cheap and yummy. The beef lo mein was around $6 (lunch special), the chicken and broccoli was $6, and the mee fun was $5.50 (I think). Bobby also got an egg roll for $1 but I tried it and it wasn’t nearly as good as the egg rolls from Edo Sushi in Pennington. Apparently you can get a small lo mein for about $4.50, but we didn’t see that on the menu until afterwards.

I also had the last of our leftover turkey with this meal (we still have a little bit of tofurkey left). And then I had a million pounds of some Tasti D-Lite.

What’s your guilty pleasure or secret? Mine is… I would be perfectly happy eating Chinese takeout every night, and I don’t actually like cooking all that much. I cannot believe I just typed that.

P.S. I’m meeting up with a blogger tonight! Guess who?

P.P.S. I’d love to do a big New York blogger meetup now that I’m settled in. Who’s interested? Who else can we invite? Where should we go?