What are your finds this week?

This post inspired by a great blog I just found called Honoring Health. She does “What’s Going On” posts like this.

This morning I got up early accidentally and didn’t feel like doing the shred… so I decided to get in a nice walk. I listened to Heather Small (the singer of the Biggest Loser theme song) and then Frou Frou when Heather’s album was over. I got in 4 miles while I thought and pondered and started to decompress from the week.

Speaking of the shred and Biggest Loser and Jillian Michaels, Jillian is hosting a Wellness Cruise this fall. Oh my. I am so tempted. Anyone else? Sixthman is coordinating it – that’s the same company that organized that John Mayer/Guster/OAR cruise I went on last year. And it’s going out of Miami (Bobby’s hometown). 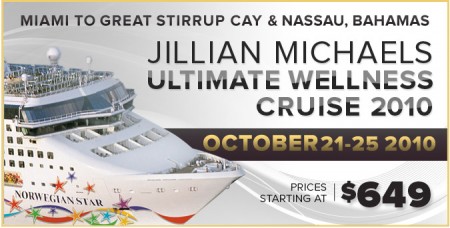 Going back to the work topic, my job revolves around a lot of online education clients. This week I got an email with some great resources for free online learning and I thought I’d share.

I’m glad I was on that email chain!

Have you tried any of these? Do you like school and learning? I didn’t realize how much I loved taking classes until after I was out of college. It’s never too late to go back though.

I was supposed to go see one of my favorite bands tonight down at Bowery Ballroom. The band is called Midlake. Midlake is an Indie rock band of classical jazz musicians. I don’t really know how to describe their sound aside from the fact that it’s orchestral and epic. Especially their most recent CD, The Courage of Others. I have never seen them in concert.

This is one of my favorite songs (“Roscoe”):

Unfotunately this afternoon I got a little feverish and dizzy so I opted to stay home. Bobby went anyway and my brother is going. I asked for a phone call during one of the good songs. I’m enjoying myself on the couch reading one of my books (Before Green Gables).

Exercise today was something new. This morning (before I got sick) I did a video on Netflix called Dance Off the Inches: Calorie Blasting Party. It’s 45 minutes and it’s a nice little cardio routine. I’ve done it before but I haven’t in a few months. I also walked 2 miles. This is less exercise than I used to do, but way more than I have been doing lately. I really like exercise at times; other times I just want to be a lump. Maybe it depends on the season? Winters are depressing for me so I become more sedentary… then as it gets nicer out I just want to move all day long.

Does your mood change with the season? What about your exercise routine? or…

What’s your favorite band? (Mine is Guster. I went on a cruise with them last year.)