The last weekend in October Bobby and I went down to NJ to visit my family. My dad sent us back with a late birthday present of CSA meat. Of course I forgot to snap a picture of the delicious chili that I made with it, but here is the simple recipe – based on this primal chili from The Grok Pot (my dad’s suggestion).

We had ours on top of white rice (rice cooker) and topped with shredded cheddar cheese. We also had a salad on the side.

This was a perfectly satisfying meal – and so far we have managed to make it into 3 meals. Once it was the main, the 2nd time was with leftover homemade pizza, and I just had some with a fried egg for breakfast.

Speaking of that pizza… 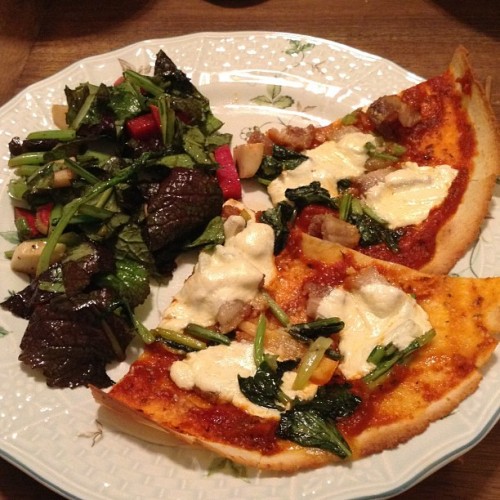 I cooked up some pork belly (more CSA meat) and then sauteed turnip greens and scallions in the leftover fat. Slapped some pasta sauce on a premade crust, then topped it with fresh mozzarella, the greens, raw peppers, and the pork – then baked it til done.

And as for pregnancy updates – I’m feeling great. I’ll get into details more soon! Just wanted to share these 2 delicious meals this morning.

What have you been eating lately? How is fall treating you?

Loved the extra hour we got this weekend. If only we always needed one less hour of sleep or had an extra hour in the day 😉

*If you didn’t see it already, check out my guest post over at A Nourishing Glimpse – it’s part of Danielle’s Plates From Around the World series. My post is on Asian food in the Bay Area. Thanks again, Danielle!*

I first went to Slice Perfect pizza back in May. It’s very vegetarian/vegan friendly and we adore the food. We actually liked it so much that we considered having them cater our wedding – but we ended up going with a local place because it was easier to coordinate. Last time I got a delicious salad and just had a few bites of pizza and bruschetta; this time I actually got a slice. 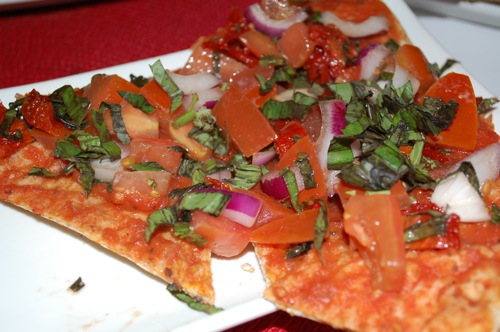 This (above) was my slice. It’s called the “Wizard” – it’s a bruschetta pizza on honey whole wheat crust. The crust is topped with all-natural marinara sauce and fresh bruchetta (tomatoes, red onions, basil, sundried tomatoes, balsamic vinegar & olive oil). It was delicious. Needed some cheese though! I love cheese. So I had some of this too: 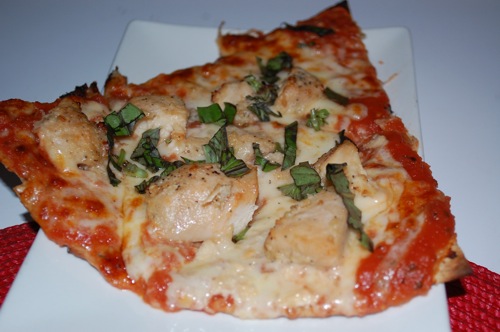 This (above) was Bobby’s first slice, the “Expert” – it was an herb crust topped with all-natural marinara sauce, free-range sesame chicken, part-skim organic mozzarella, and fresh basil. Lots of cheese, lots of yum.

We also got the “Beginner” hummus pizza (below) – herb crust spread with lots of organic hummus, then topped with caramelized onions and kalamata olives. I ate the olives (and some of the slice); Bobby doesn’t like olives and always forgets to ask for them on the side. 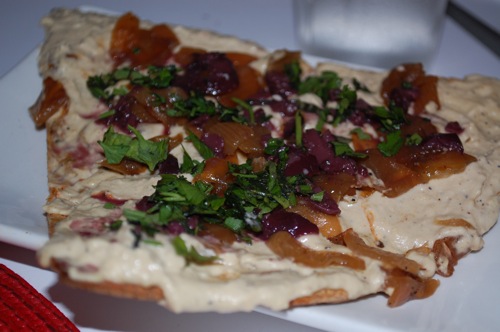 You can’t have pizza without ice cream, though. We stopped at Tasti D-Lite on the way home, and when Bobby checked in on Foursquare he happened to get a BOGO coupon! So we each got a chocolate and vanilla swirl: 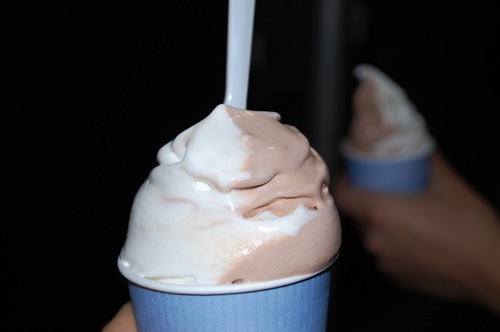 I had to help him. He was full. How can you be too full for Tasti D-Lite?

Exercise of the day: walking to and from work (2.8 miles total) + a video TBD (hopefully about 30 minutes of yoga/pilates/something similar)!

If you haven’t checked it out already, Foodbuzz just launched a new Healthbuzz section. I’m one of the Contributing Health Editors, along with a few of my favorites – there are too many to list so go check them out yourself.

I mentioned yesterday that my sister came to visit me for the weekend. So…

Bobby and I have been meaning to go to this organic pizza place – Slice – on the upper east side for a while now. I’d heard of it through my Cornell listserve (the owners are fellow Cornellians) and apparently Bobby’s business partner is actually friends with them. We decided to take Julia there for her first night in the city (Friday).

Slice also offers gluten-free pies, and actually pies for people with all different allergies – dairy, wheat, gluten, nuts, casein, etc… Everything is made to order and fresh (no pre-made pizza that gets reheated). The slices come sliced into bite-size pieces – about 5 per slice, I think. Apparently they are the only pizzeria in the country that uses 100% organic mozzarella cheese.

We shared the bruschetta to start ($5.50 I think). I left my camera at home so these pictures are taken from Yelp. This picture shows the bruschetta on little crackers, but it was actually served with fresh toasted pita bread – which was delicious. I think the “pita” was actually the same dough they make their (thin-) crust pizza with. 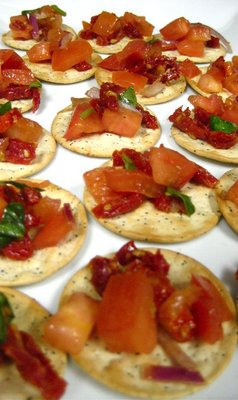 Julia got the “intermediate” slice ($5). It was a honey whole wheat crust with marinara, arugula, and goat cheese. It was amazing. Their menu is set up like a school – appetizers are “additional learning”, drinks are “extracurriculars”, and so on. 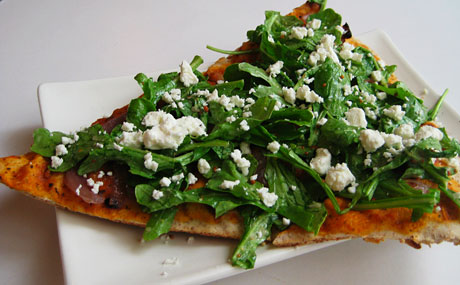 Bobby got 2 slices – one was “Taste of India” ($4.50) (honey whole wheat crust, channa masala, and part-skim mozzarella). You had to eat this with a fork it was so thick and chickpea-covered. I’m going to be honest and say I didn’t like this one at all… but I don’t like Indian food; maybe an Indian food lover would enjoy it. Bobby and Julia didn’t like it that much either. 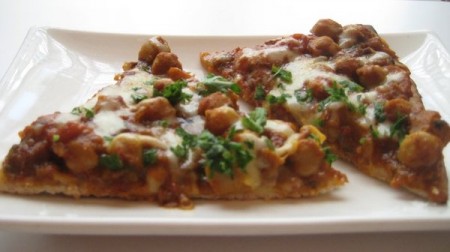 His other slice was called “the master” ($5.50), which was my favorite. I don’t have a picture. It was a thin-crust honey whole wheat pizza topped with marinara sauce, organic part-skim mozzarella, and crumbled free-range organic herbed chicken sausage. Oh my goodness, so delicious. It was light but meaty and the flavors were perfect.

I got this amazing salad, ($7) and I shared some of the pizzas and of course the bruschetta. (Greens, cucumbers, tomatoes, goat cheese.) I got this with the carrot ginger dressing – I dumped all 3 containers of dressing on the salad and wished they had given me more. 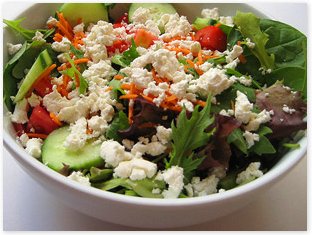 Next time I think I will get “the intermediate” (Julia’s pick) and steal some of Bobby’s “the master” (the organic chicken sausage one).

Slice was great – organic and reasonably priced. We left feeling pretty full – could definitely do without the appetizer next time. We’ll probably be back one night this week.

I broke out my camera yesterday and took pictures of several things I ate. It was nice. It felt odd after keeping the camera away for so long. The pictures include yummy oatmeal that converted Bobby and Julia into oatmeal lovers. That makes me happy. Bobby has been a willing weekend oatmeal participant for the last few weeks, ever since he found out about steel cut oats.

Do you like pizza? What’s your favorite kind? I like vegan or vegetarian pies with lots of veggies.

This innovative recipe uses loose tea leaves for a fun and fresh take on a salad. The raw eggplant is delicious and almost meaty… I didn’t know you could do this with eggplant until I had it the other day. 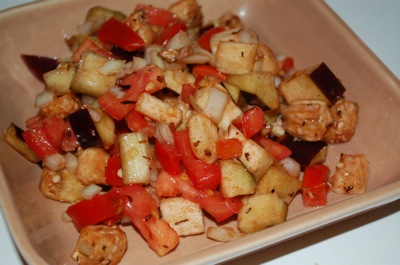 Mix everything together. Let sit for 20+ minutes for the flavors to really mesh.

The inspiration for this recipe came from the chef of Sanctuary T Restaurant, who was demo-ing his tea spice mixes at Whole Foods. Unfortunately for him I didn’t buy his spices, but I did make my own version! 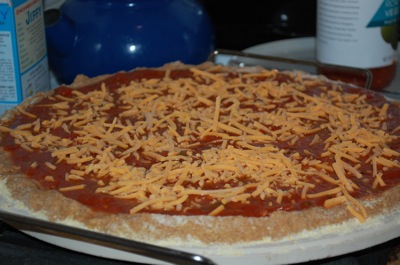 I served this with my easy pizza dough recipe for dinner. For the flour mixture I used a mix of Jiffy cornbread mix, whole wheat flour, and oat bran (out of wheat bran, which I usually add). I topped the pizza with extra sauce and some cheddar cheese (light on the cheese, just how we like it). We each had half. We eat a lot of pizza. 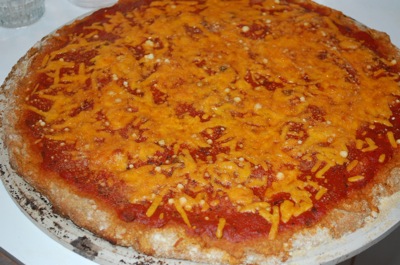 I’m blogging two nights in a row… what am I, unemployed again? (I’m not; still loving the new job and keeping busy.)

First, I must say – I loved all of your comments on yesterday’s post (about chilling out re: exercise). Guess what – no exercise today either (does 4 blocks of walking count?). But it’s all good. I don’t need much to be happy.

This weekend was jam-packed with fun. On Saturday night my best friend from high school (she lives in NJ) came up to visit me and Bobby. She brought her boyfriend as well. Bobby and I took them to walk down 5th Avenue, which is gorgeous this time of year. We stopped at the Rockefeller center to see the tree… 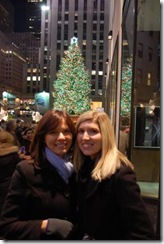 Oddly enough, I have a really similar picture of the two of us in the same pose (with a Christmas tree behind us) in Princeton from 2005 (I think). We love Christmas.

After we saw the beautiful Christmas tree at Rockefeller, we got stuck in people-traffic because everyone was watching this light show (the snowflakes light up and dance to holiday music). 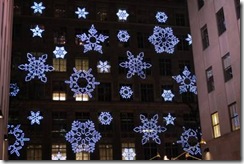 Eventually we made it to 44th and 6th Ave to go to Virgil’s Barbecue… but actually Christine doesn’t like BBQ (whoops!). Luckily there was a nice restaurant next door called The Long Room, which is so new that it doesn’t even have a website yet (!). It’s a nice Irish pub/bar and it’s reasonably inexpensive (for New York). 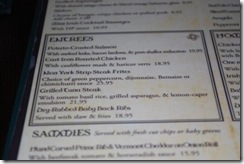 The menu looked great. I ordered the “Cast Iron Roasted Chicken” – with cauliflower mash and haricots verts (18.95). Bobby, Christine, and Devin all ordered beers (Guinness – it’s an Irish restaurant) and I got a diet coke. 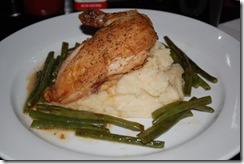 My meal was amazing. The “cauliflower mash” is mashed potatoes with some cauliflower mushed in; the green beans (haricots verts) were wonderfully seasoned and oiled; and the chicken was amazingly tender. I finished just about all of it (Bobby stole a few bites). Bobby (and Christine) ordered the Fish and Chips ($14.95 I think)… 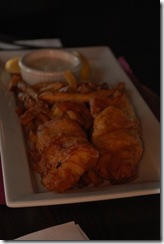 Really good. He poured vinegar all over the “chips” (fries) so I didn’t like them, but the fish was great. Devin got a Buffalo chicken pizza (13.95 maybe?) and I think his was probably the best dish (no picture). 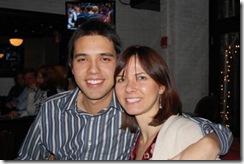 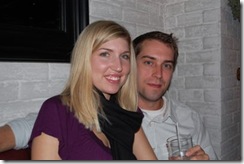 I would definitely go back here. I want that pizza! We had a really awesome time. Christine and I get along; Bobby and Devin get along – they are another perfect double date couple. 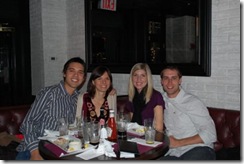 Can’t wait to see them again – probably for New Year’s, if not earlier.

Do you like to go on double dates? Bobby and I have been doing lots of couples outings recently (like Josie’s West with Kate and Simon) and I am absolutely loving it.