As a perpetual nibbler, I have to be careful about what foods I keep on hand in my kitchen and around the house. One of my favorite snack foods has always been Stacy’s Pita Chips – the cinnamon sugar flavor especially. One bag can disappear in a day if I’m left unsupervised. This past week I tried a new recipe for Taste&Create XI that may be able to replace my addiction…

My partner this week was Heaven is Chocolate, Cheese and Carbs – and her recipes certainly are heavenly. I picked this one because of my peculiar addiction to cinnamon, and the snackability factor. These are great for dessert, a snack, and even with breakfast. They are toasty and crisp, with a savory cinnamon seasoning that satisfies a sweet craving.

The only change I made was that I used molasses & sugar (I’ve been experimenting with molasses recently – I think it’s a new favorite) rather than just sugar, and I also added a bit more cinnamon – I’m not sure how much extra; I just kept sprinkling 🙂 Directions
1. Preheat oven to 400F.
2. Thoroughly mix together dry ingredients: flour, sugar, cinnamon, and salt.
3. Mix together the molasses and oil, then add to the dry ingredients, along with half of the water. Continue to add water to get a rough, dry dough. Knead on a floured surface until you have a cohesive ball.
4. Divide the dough into 4 quarters. On a piece of parchment paper, the dough as thin as possible. (I actually should have rolled mine a little thinner.) Cut the dough into squares (or another shape, as desired), and prick with a fork. Sprinkle generously with the cinnamon sugar mix. (I had some left over – but not much.) 5. Bake for about 15 minutes, or until golden brown. (Note: if you put molasses and extra cinnamon, these will be a bit darker than golden brown!) Turn the sheet halfway through. While the first batch is baking, roll out another quarter.
6. Let the crackers cool before breaking them apart. If you don’t eat them all in one sitting, store them in a ziploc bag to preserve freshness. ENJOY!

Summing up: like I said earlier, I really enjoyed these crackers – flavorful and light, but satisfying.

There is another variation on this recipe that I’ll probably try – same as this, but with herbs instead of cinnamon and sugar. I have CSA oregano and rosemary that I dried, and I think they’d be excellent. Bobby loves herbs almost as much as I love cinnamon, so I don’t think those would last long either. Thursday
Dinner – Summery bulgar – OJ and lemon juice will be involved; also a side salad with CSA veggies
Dessert – Fruit from CSA + Cookies…

More great menus can be found at Organizing Junkie!

I’m excited for this week’s plan – I have a bunch of new ideas and I’m looking forward to experimenting. I’m finally getting the hang of working and managing to keep up with the rest of my life. To be honest, cooking dinner after I get home from work each day keeps me sane. I have yet to make that Waldorf Salad from last week’s plan (we ended up having leftovers instead), so I might make that as a lunch this week. Don’t worry, the recipe is coming! I hope to give you lots of posts with recipes this week, so stay tuned 🙂 Tonight I made Mango Ginger Tofu from Vegan With a Vengeance.

This book is amazing. This recipe is fantastic (okay, I made a few changes… I really can’t help myself). Original recipe can be found here. Mango Ginger Tofu (serves 3 people – we had some extra) Directions
1. Prep the marinade: heat the oil in a medium saucepan and then add the garlic and ginger. Saute for 4 minutes. Add the mangoes and saute for 4 more minutes. Add the rice vinegar, molasses, and water. Cover and let simmer for about 20 minutes. Uncover and let simmer for 3-4 more minutes. Add OJ, cinnamon, cumin, salt and pepper, apple cider vinegar, and lime juice. Mix well and then let it cool.
2. Prep the tofu: I cut mine in pretty triangles, but you can make any shape you like. Just make them into slices about a centimeter thick.
3. Place the tofu and the marinade in a tupperware container or a ziploc bag. Let this marinate for at least an hour. I let mine go overnight.
4. Preheat oven to 375F.
5. Remove the tofu slices from the marinade and place them in a baking pan in a single layer. Top with a bit of the marinade. Bake for 20 minutes.
6. Flip the tofu slices, and coat with more marinade. Mix the peppers and mango in the remaining marinade and place them on top of the tofu. Bake for 10 more minutes. Serve with rice, couscous, and a salad! I made us a delicious salad tonight with some fresh CSA goodies…

We loved this scrambled tofu breakfast. Bobby has been raving about it all night. The tofu was crumbly, but still held its texture and chew. The veggies and spices added their own wonderful flavors. If you’re not in the mood for eggs (or if you are vegan, or allergic to them), this meal is just as healthy and possibly more substantial and filling. 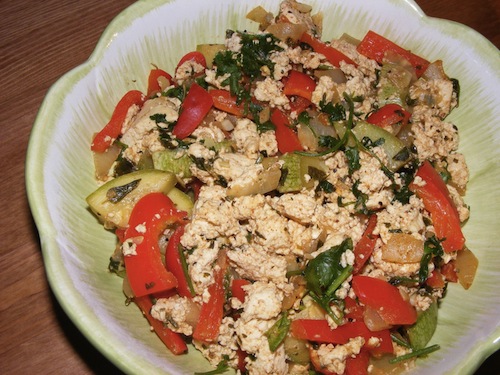 If you don’t have nutritional yeast, just omit it – you probably won’t need to add as much water though.