Remember that Carrot Kinpira I made the other week?  Well I tried a different variation with burdock, too.  This is going to be my Blogger Secret Ingredient (BSI) recipe.  This week’s BSI is being hosted by Catherine over at Stevia ‘n’ Spice and she chose carrots!  They are one of my favorite things.

Kinpira is a Japanese method of cooking.  It’s typically used when cooking root vegetables.  The popular seasonings are soy sauce, mirin (cooking wine), and chili flakes.  I never have mirin on hand, so I just omit it, but I find that some rice vinegar is a great substitution.  Kinpira is a perfect addition to a lunch (think bento boxes), a side dish for dinner, or even part of a savory breakfast.  I adore the Japanese way of eating – simple, fresh, and always in moderation.  There’s a reason that less than 3% of the Japanese population is obese!  Take this recipe and run with it – let me know what you think and what other veggies you would use.

Carrot and Burdock Kinpira is typically called “Kinpira Gobo” in Japan.  It’s definitely a staple.  Oh yeah – it’s vegetarian and vegan to boot!  Give it a try… 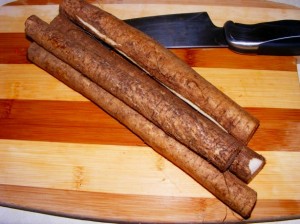 Enjoy!  What would you eat this with?  Have you ever tried burdock?  It’s delicious and incredibly good for you.  It’s earthy-tasting (in a good way), and very versatile.  My mom used to make burdock tea when she was pregnant with my little siblings.  It’s also good for your blood (cleansing) and apparently does wonders for the hair and scalp.