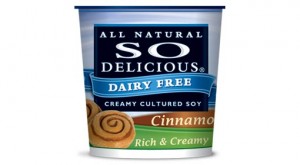 It was CInnamon Bun flavor!  I liked it a lot.  The consistency was slightly different from normal yogurt – less creamy and more like custard.  The flavor was very good, but a bit sweeter than I would have liked (isn’t everything though?  I like being able to add my own sweeteners).  Bobby had a bite and he liked it too.  We both normally dislike soy yogurts, but this one is a keeper!  I found them for $0.99/each at Whole Foods.

Today I tried another new kind of yogurt – Stonyfield’s YoBaby in Apple flavor:

There are a few reasons to like YoBaby.  First, it’s whole milk yogurt, which I have been obsessed with recently.  Second, it’s in perfectly portion-controlled containters!  The only issue I have with whole milk yogurt is that it’s so addicting that I will accidentally eat too much of it right from the tub – which could lead to some too-tight clothing and a sore tummy.

Now that I read the nutritionals I kind of wish I had gotten YoBaby Plain, because that’s a lot of sugar (I’m not used to flavored yogurts)!  But I really like this flavor.  I got 2 mixed 6-packs (Apples & Blueberry, Vanilla & Banana) and they all have pretty much the same nutritionals.  I hope Bobby will help me eat them, because he recently discovered the joy of yogurt with granola and other crunchy toppings.

I have an exciting announcement that I will post… later tonight?  Tomorrow?  It has to do with yoga 🙂