I’m sitting by the door waiting for kids to come trick-or-treating. I have a nice treat basket filled with random samples of things that I’ve gotten (thanks, Whole Foods!), YummyEarth lollipops, Reese’s cups (my favorite), and “Grape Coconut Jelly” (interesting Asian candy things that Bobby gets). (Don’t forget about the YummyEarth discount – good until November 15th.) 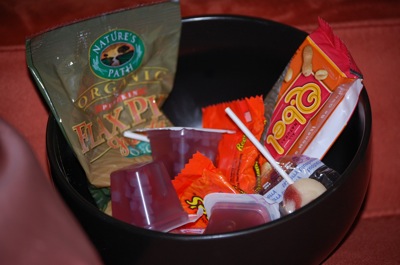 We didn’t get any kiddies last year, and I don’t know if we will this year either. Do you get trick-or-treaters?

Earlier today Bobby joked, “Maybe the reason Americans are becoming obese is that we focus on candy for every holiday and on Halloween we buy too much so we have extra left over. I bet other countries don’t do this.” But he’s right. Trick-or-treating is a very North American thing (Canadians do it too). It’s done in the US, the UK, Canada, parts of Mexico, Puerto Rico, and Ireland. Apparently it’s been introduced in Italy and New Zealand (because of American culture infiltrating the media), but it’s been pretty controversial. Stuffing your face with candy seems to be a uniquely American thing to do.

As a kid I loved halloween. I don’t think I cared too much about the candy, to be honest. I did love dressing up. My mom always helped me and made elaborate costumes. I’ve been everything from a witch, to a pumpkin, to a bag of jelly beans (so cute), to a little Dutch girl with clogs, to a witch again, to a hippie… Well, you get the idea. 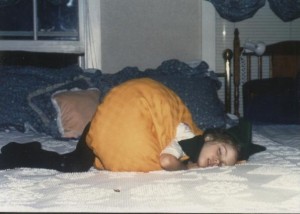 Of course I ate my candy – who wouldn’t? But I remember saving it for ages (I always “save” things for the “best” time) and ending up throwing most of it away after it went bad a few months later. This is the same way I treat most nice things I own; I save them for opportune times, but often the opportune time never comes and I regret saving whatever it is. Living in the moment is probably a better idea, anyway. And who wants to save something like calories? That doesn’t make sense.

But back to Halloween – it’s a shame that we can’t give out candied apples or homemade cookies anymore. I think that would be the best way to celebrate.

[Aside: we just got a kid! A little alligator! So cute.]

Am I being too cynical? Should I just accept that (most) Americans glorify unhealthiness because it’s “the land of the free” and we can pretty much do what and eat what we want without thinking of the consequences? I think I’m getting too pensive for a Saturday night, so I’ll stop there. Hope you all enjoyed your Halloweens.