I have a juicy product review for you guys today. I tend to be choosy about which products I will accept for review on the blog, because I want to keep it honest. I do review most yoga products, so when Manduka contacted me about reviewing their new yoga block, I was psyched.

Here are the details about the unBLOK:

I was skeptical about the shape when I first saw the unBLOK because I’m so used to the normal, rectangular block shape that most other yoga blocks have. But I actually think I preferred using the unBLOK. I tried some supported chest and shoulder openers (supported fish, supported bridge), and this block was great. It’s much nicer to have a slightly rounded curve supporting your back than a straight block. 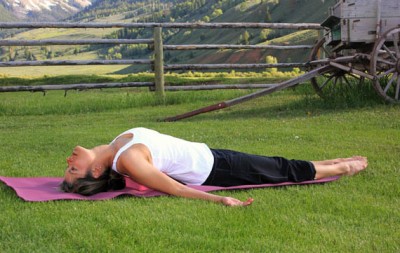 Supported Fish Pose – put a block under your upper back and let your arms fall open. You can also put a rolled up blanket underneath your knees for extra low-back support. (Image source.)

I also tried out some standard poses that might require a block – Virasana (hero’s pose) and Artichandrasana (half moon pose) and the unBLOK worked very well. It really is slip resistant, and it’s sturdy like a cork block is, but still light, because it’s foam. It’s more grippy than most foam blocks I’ve used, which is good for poses like half moon.

You can nominate a local studio that helped you “unblock” your practice for a chance to win prizes. You can nominate your studio {HERE}. Be sure to do it today, if you want to enter, because the campaign ends today, May 28th.

I just nominated my studio, Pure. And I got a 15% off discount code at the end after I submitted.

Do you use a block for your yoga practice? What is your favorite local studio?

I don’t use a block that often, but I love using blocks for supported, restorative postures. I have a lot of favorite studios in NYC. The two that I have been to the most are Pure and Yoga Vida (where I did my training).